Our Executive Director Ian Cooke visited the Neponset Estuary during the record high tide produced by winter storm Riley on Friday March 2 and documented its effects. 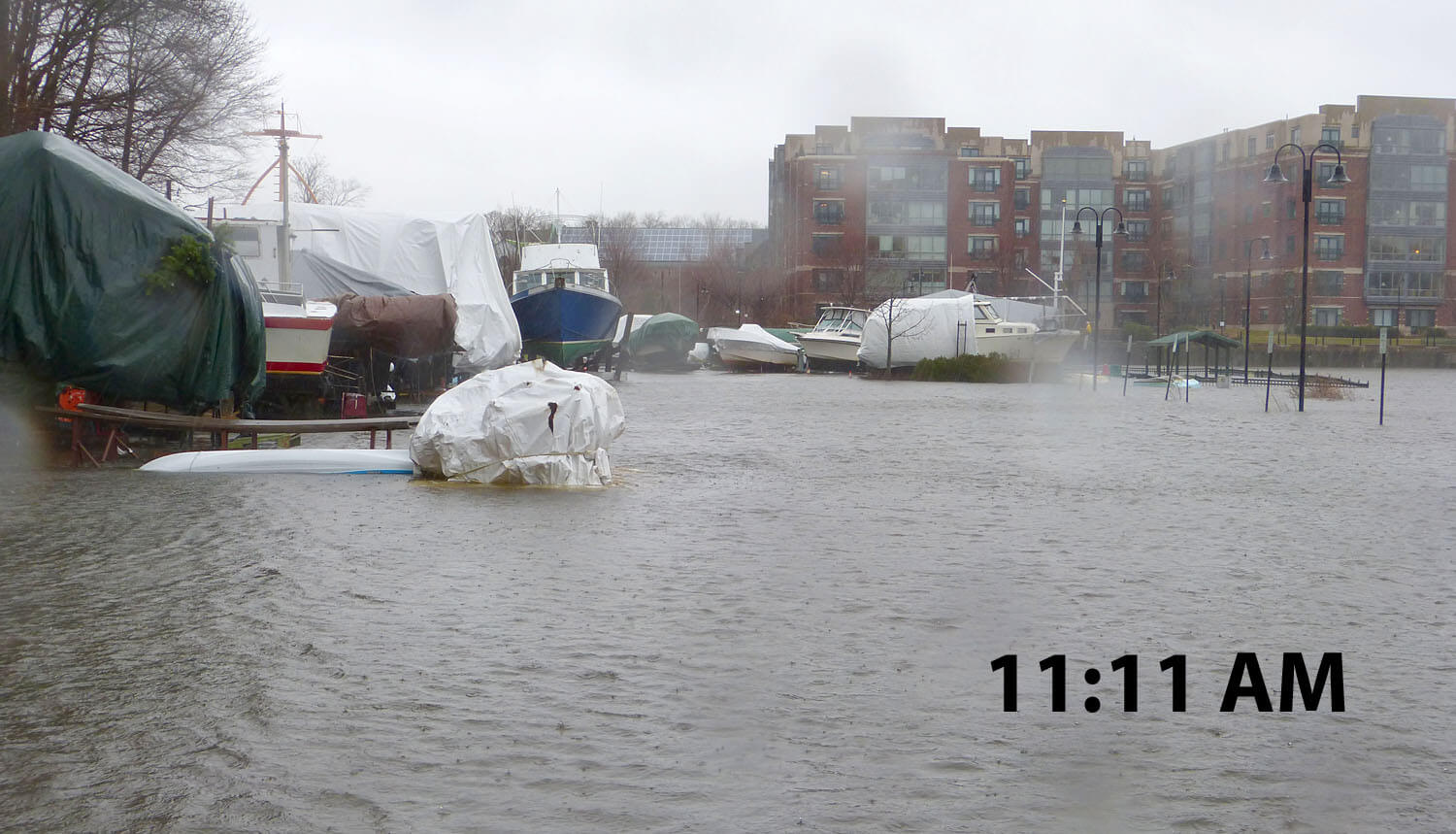 This was two minutes before the predicted high tide at 11:13 AM:

Then he walked over to the nearby town park at 11:16, three minutes after the predicted high. This is as wet as I’ve ever seen it: 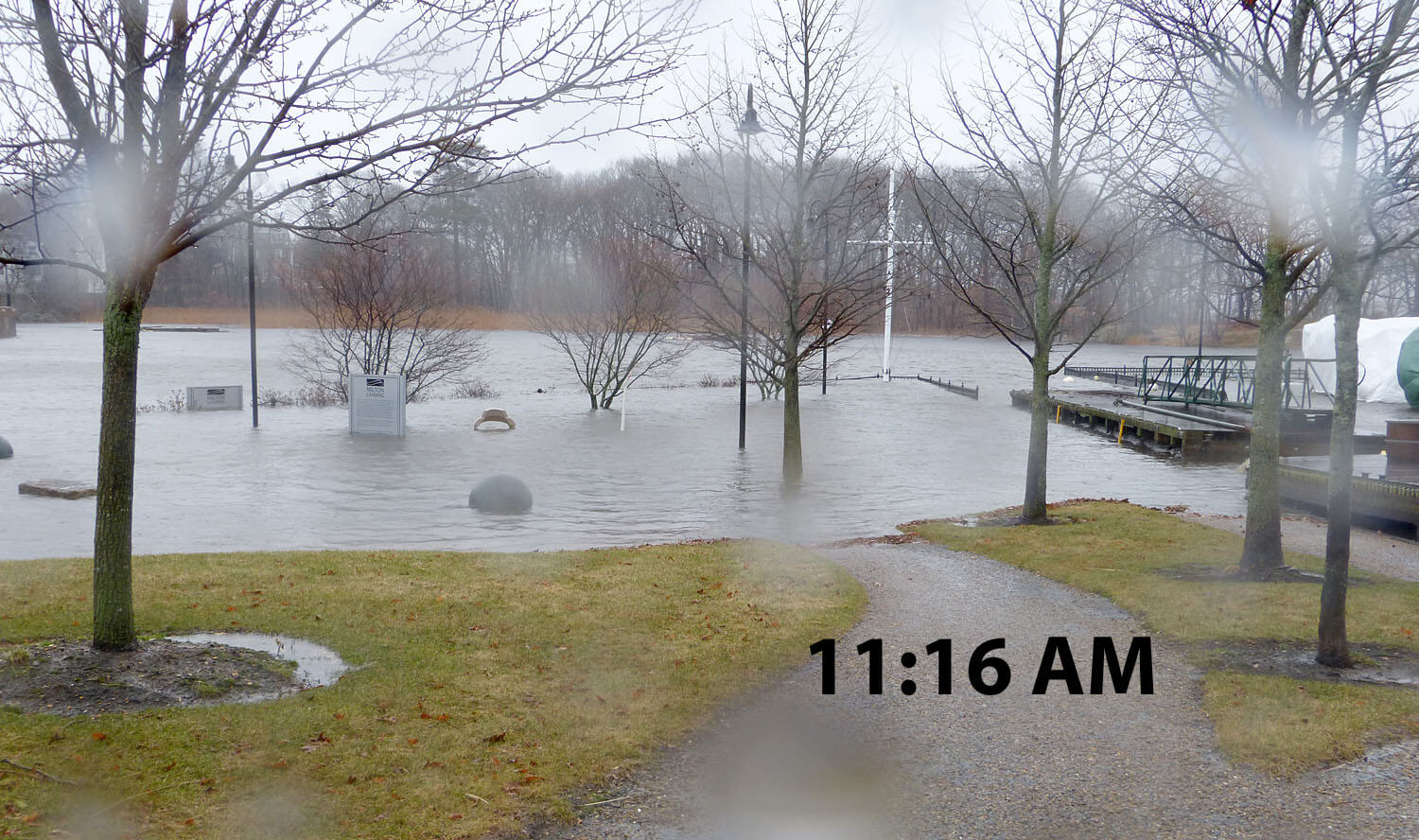 Here’s the fenced portion of the bulkhead, with the picnic tables and some dinghies afloat and jostling: 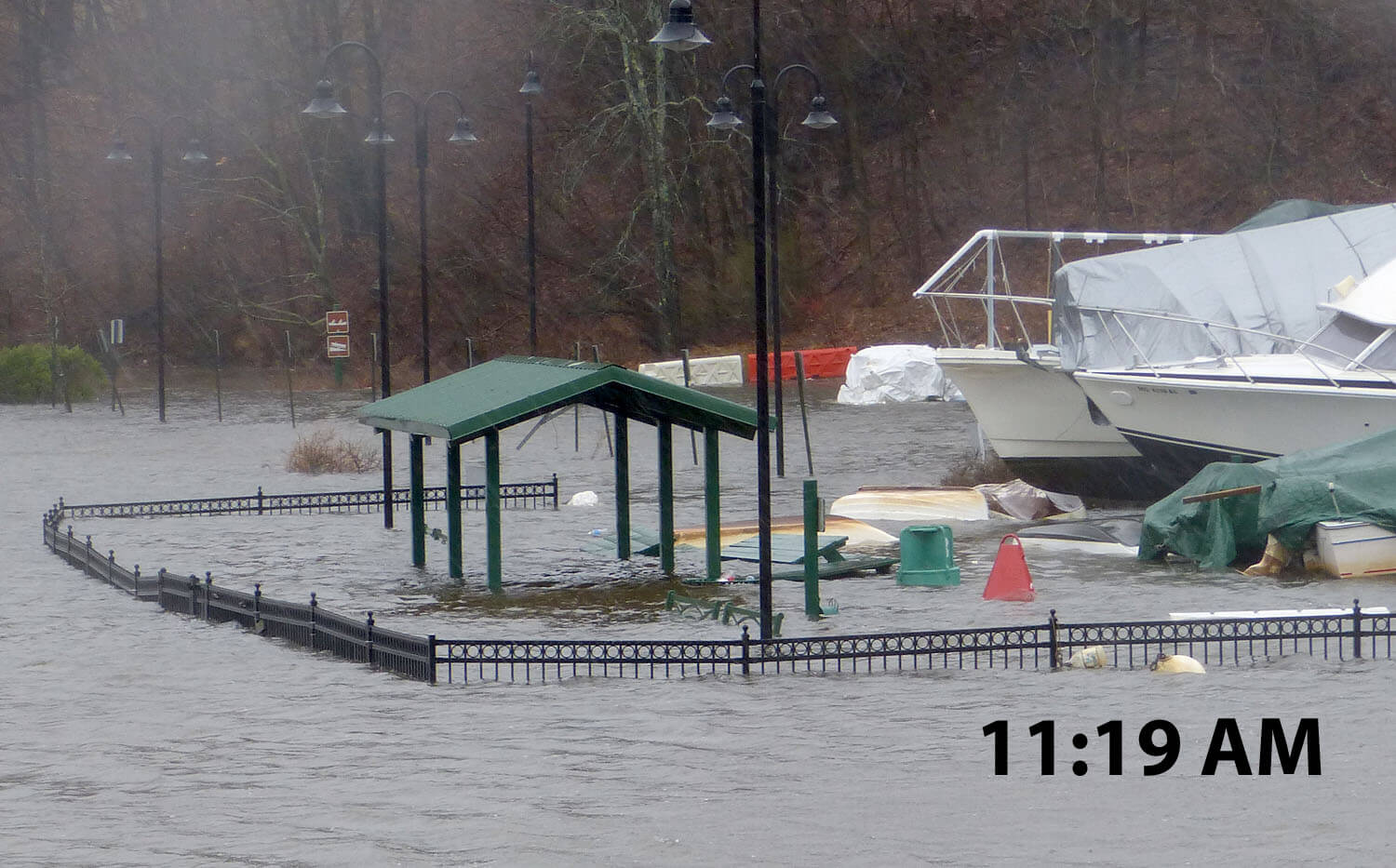 Then he walked over to Lower Mills, where the entrance to the Ware Mill at right was nearly underwater: 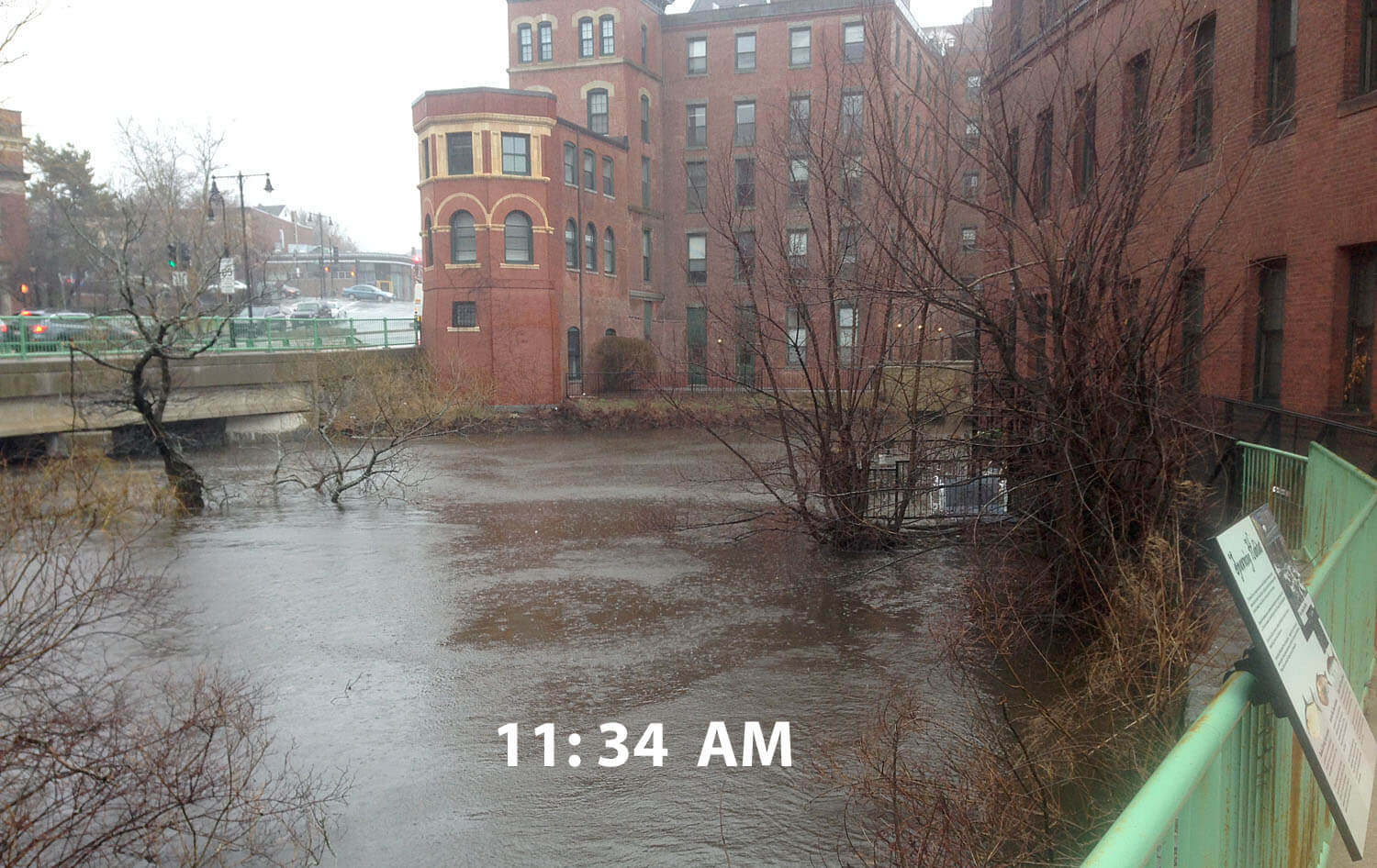 A half hour later the Neponset Valley Yacht Club on Granite Ave was nearly afloat:

Here’s a daring motorist trying to get out of the office building at Two Granite Avenue. The street is flooded back to the highway ramp: 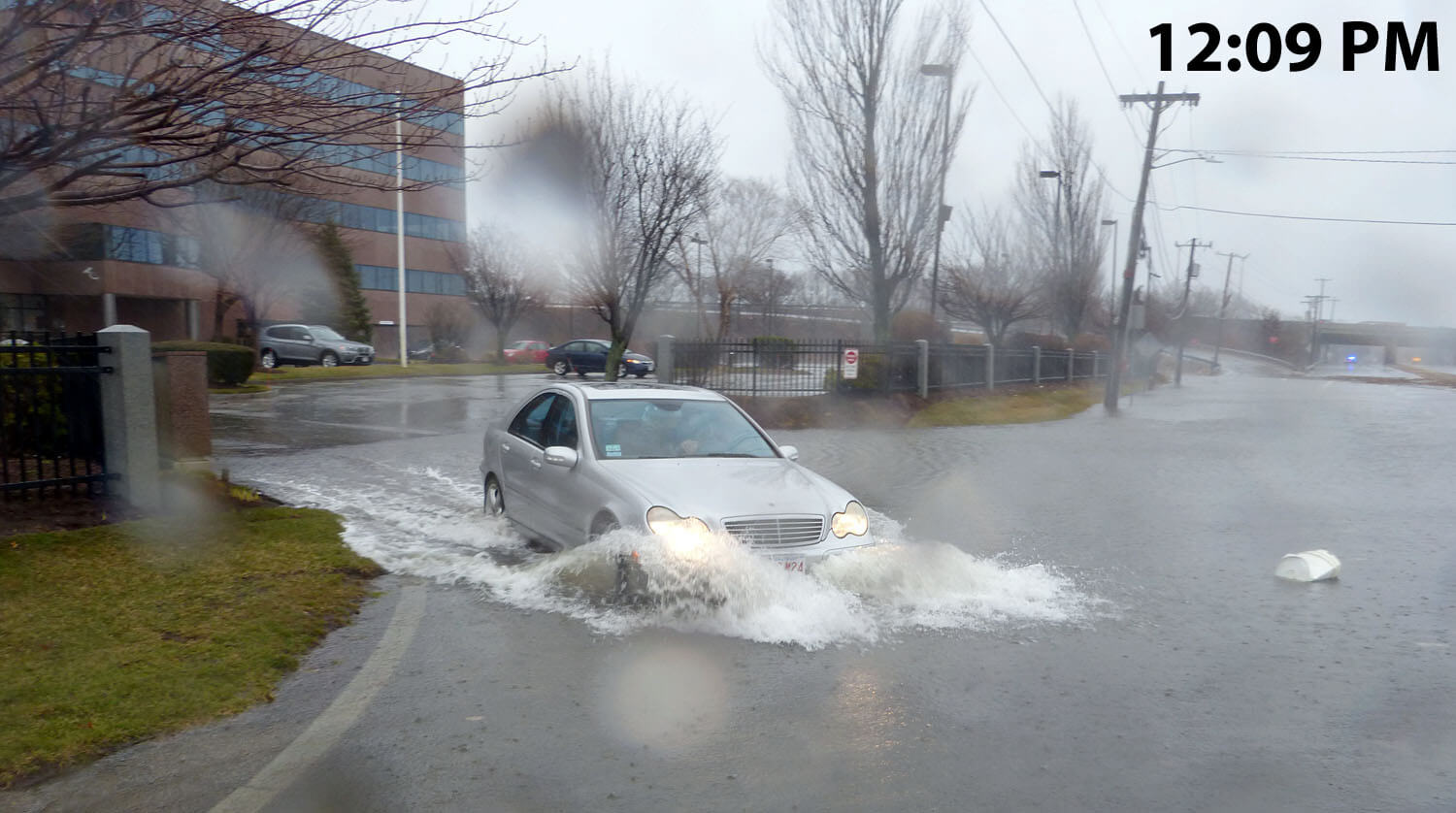 Just across the street two guys with a truck were trying to secure a float at the yacht club. You can see the river flooding onto the street at rear:

By the time he got to the Adams Inn in Quincy, about 90 minutes after the predicted high, the water had started to fall, tho’ the wrack line on the lawn shows how it had nearly lapped the foundation:

But there was still plenty of water at the entrance to Neponset Landing, which apparently became impassable:

Meanwhile a lake had formed behind Adams Inn: 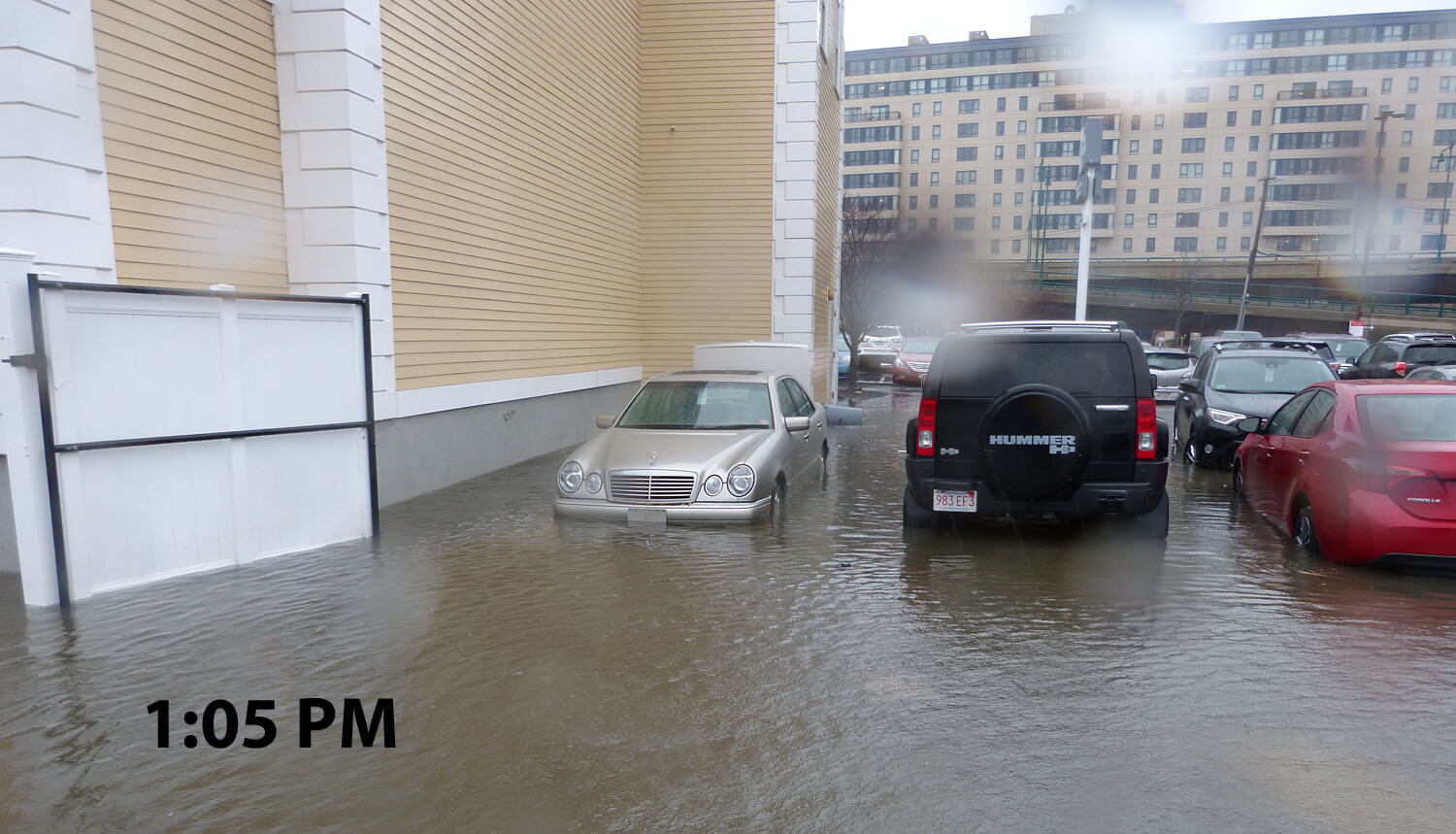 He got to Shea Boulevard at 130 PM. It was still partly blocked by stranded debris: 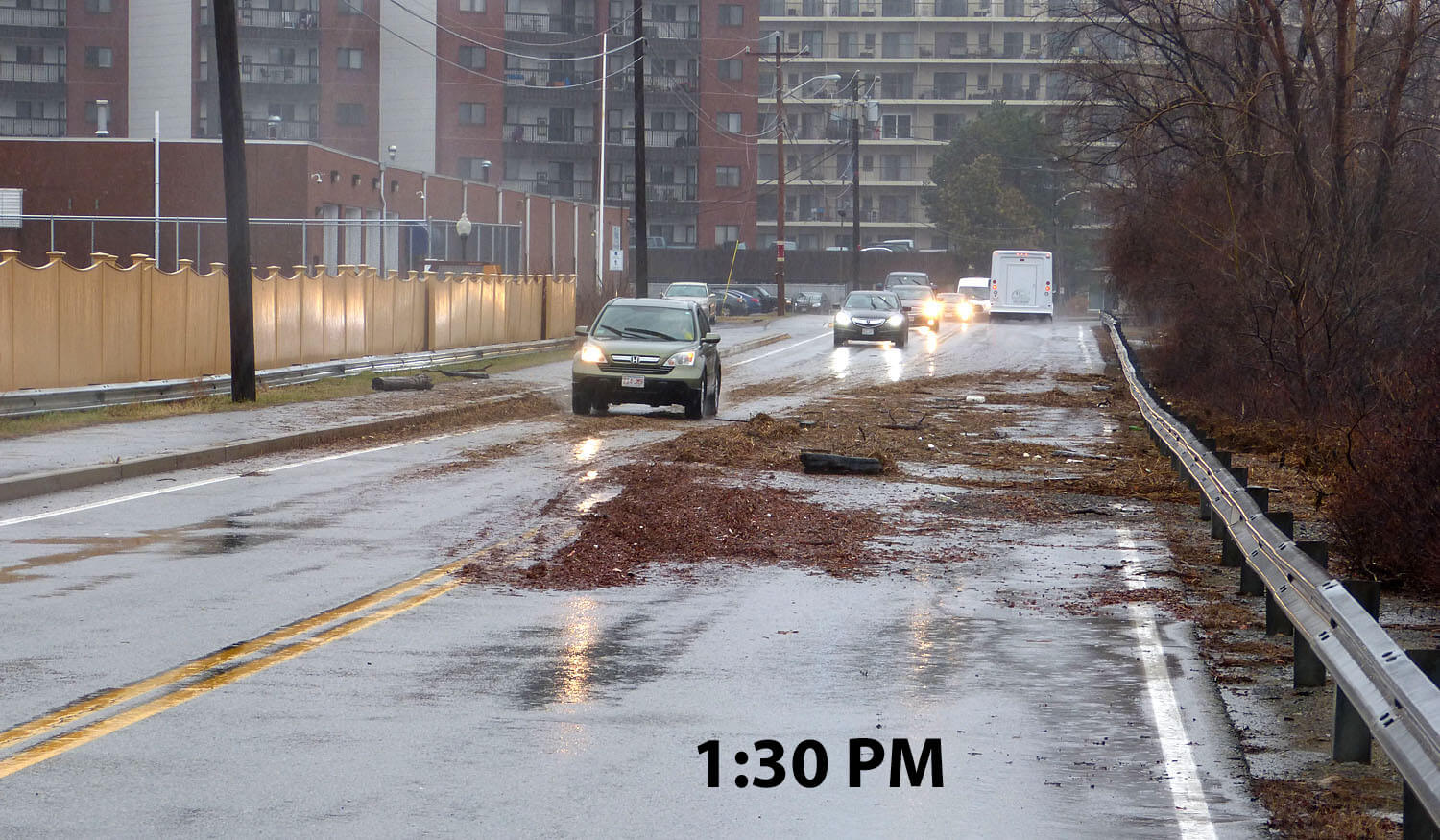 An abandoned car sat in the connector to Quincy Shore Boulevard: 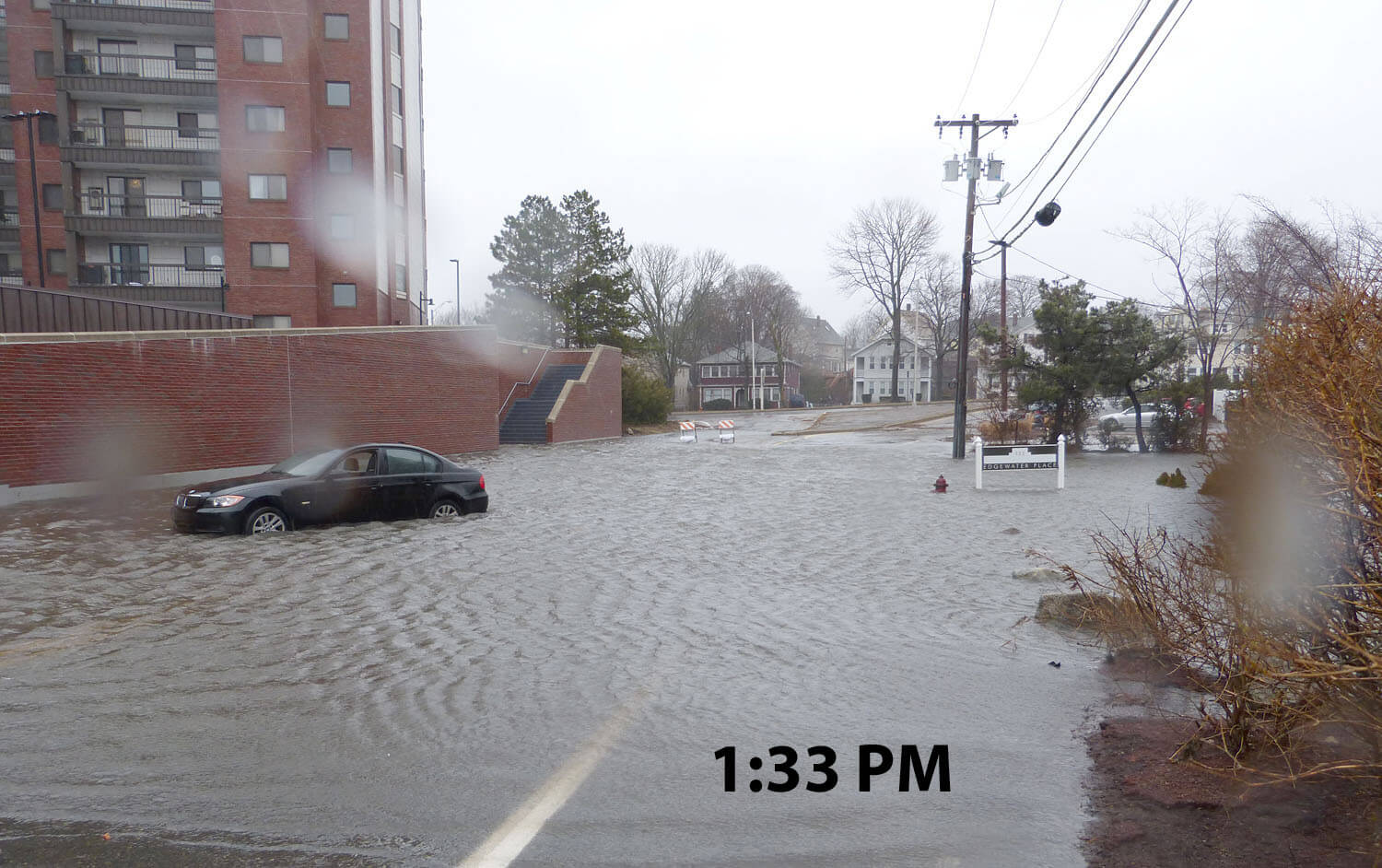 By then Ian was getting a little weatherbeaten himself: 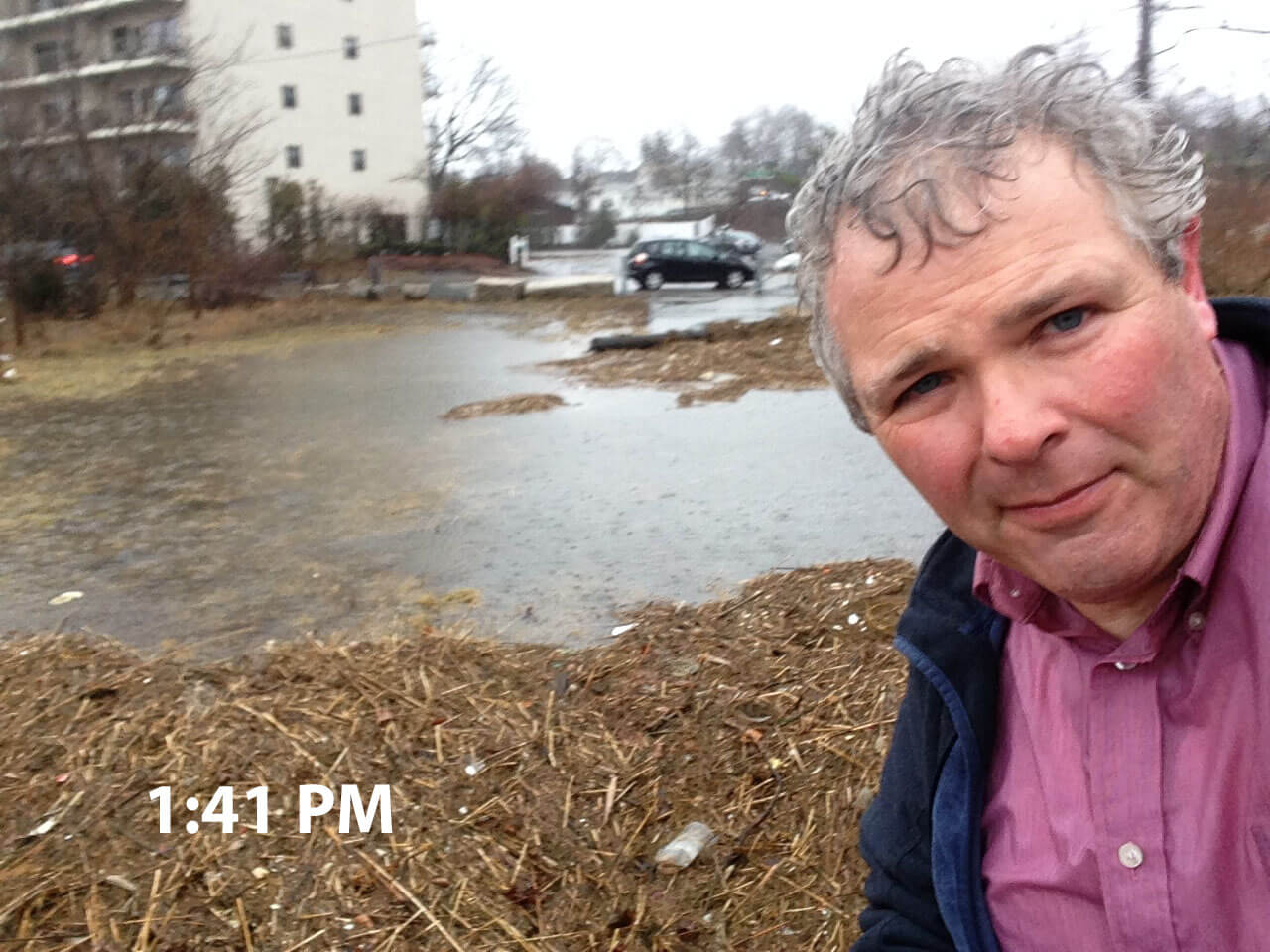 Here’s what Riley looked like from above, courtesy of NOAA, with its counterclockwise circulation driving the ocean straight at Massachusetts Bay: 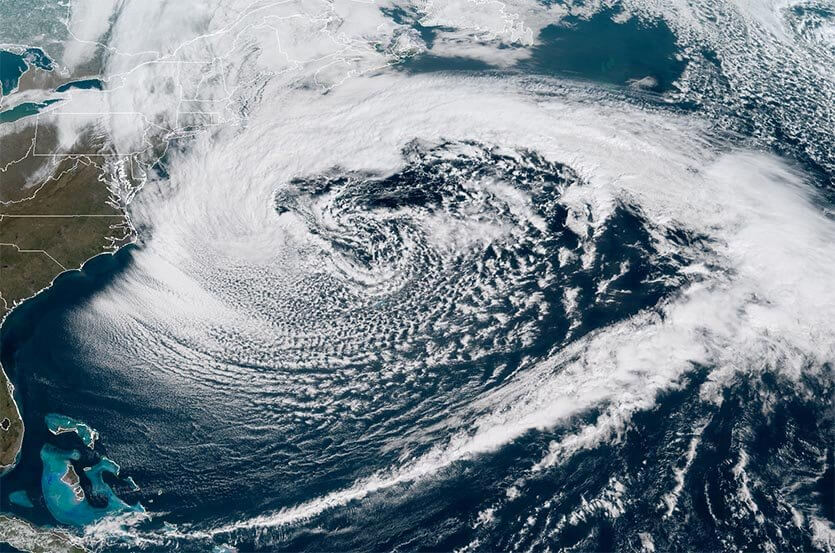 According to Weather Underground, this produced the third highest water level ever recorded in Boston, thanks to the combination of the storm surge and a spring tide associated with the full moon. The peak occurred at  11:12 AM, within minutes of the predicted high tide, and was measured at 4.4 ft above Mean Higher High Water, which is the average of the highest daily tides. Here’s an NOAA graphic showing the actual tides in red between March 1st and 5th. You can see they remained well above the predicted highs for several cycles after March 2nd, a lingering effect produced by onshore winds from the slow-moving storm:

I tried to get some photos myself but started too late. I was at Milton Landing 90 minutes after the high and the river had already receded, as you can see from the scrim of stranded leaves behind the man in orange: 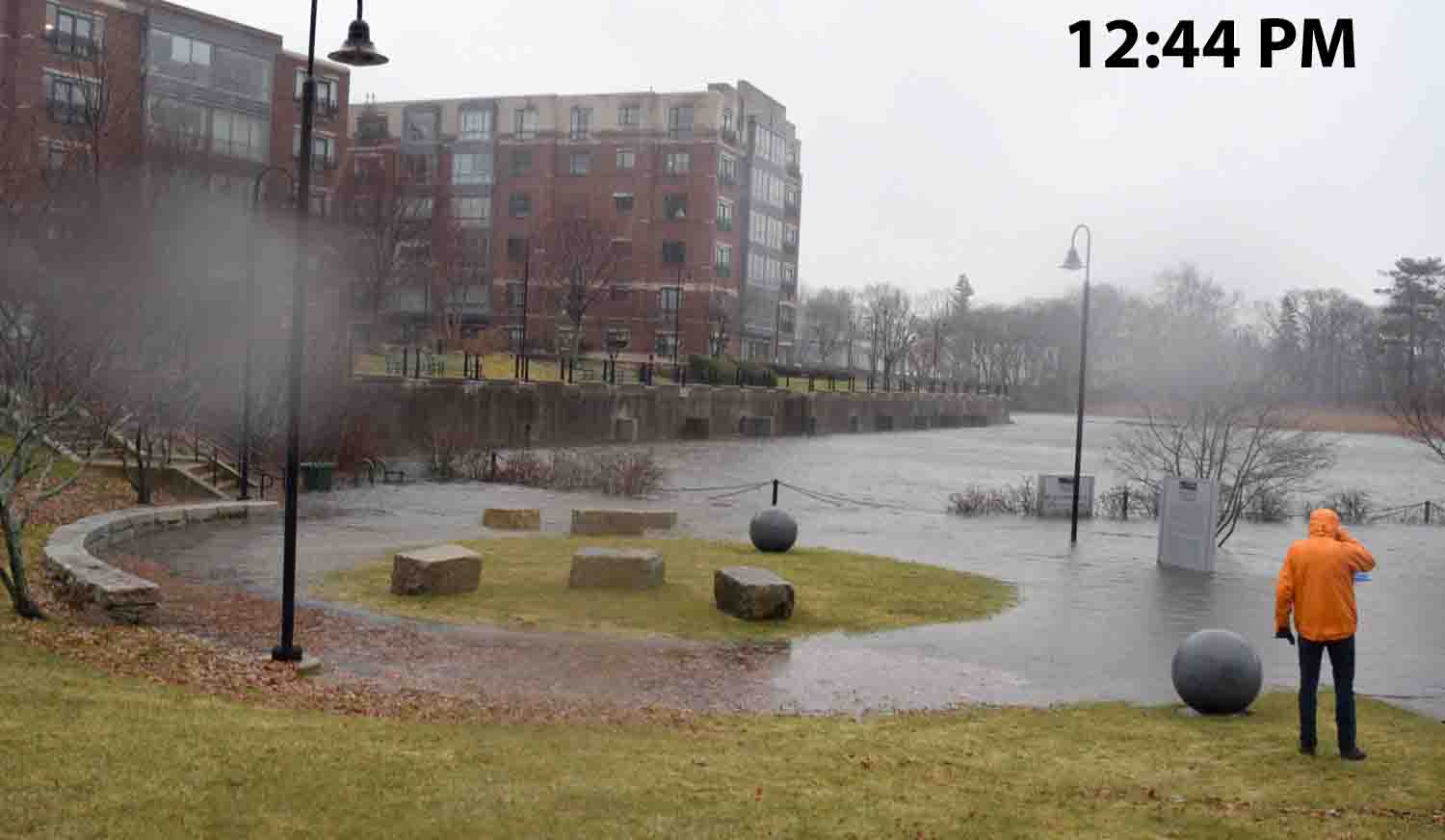 At the bulkhead the pavement was starting to emerge: 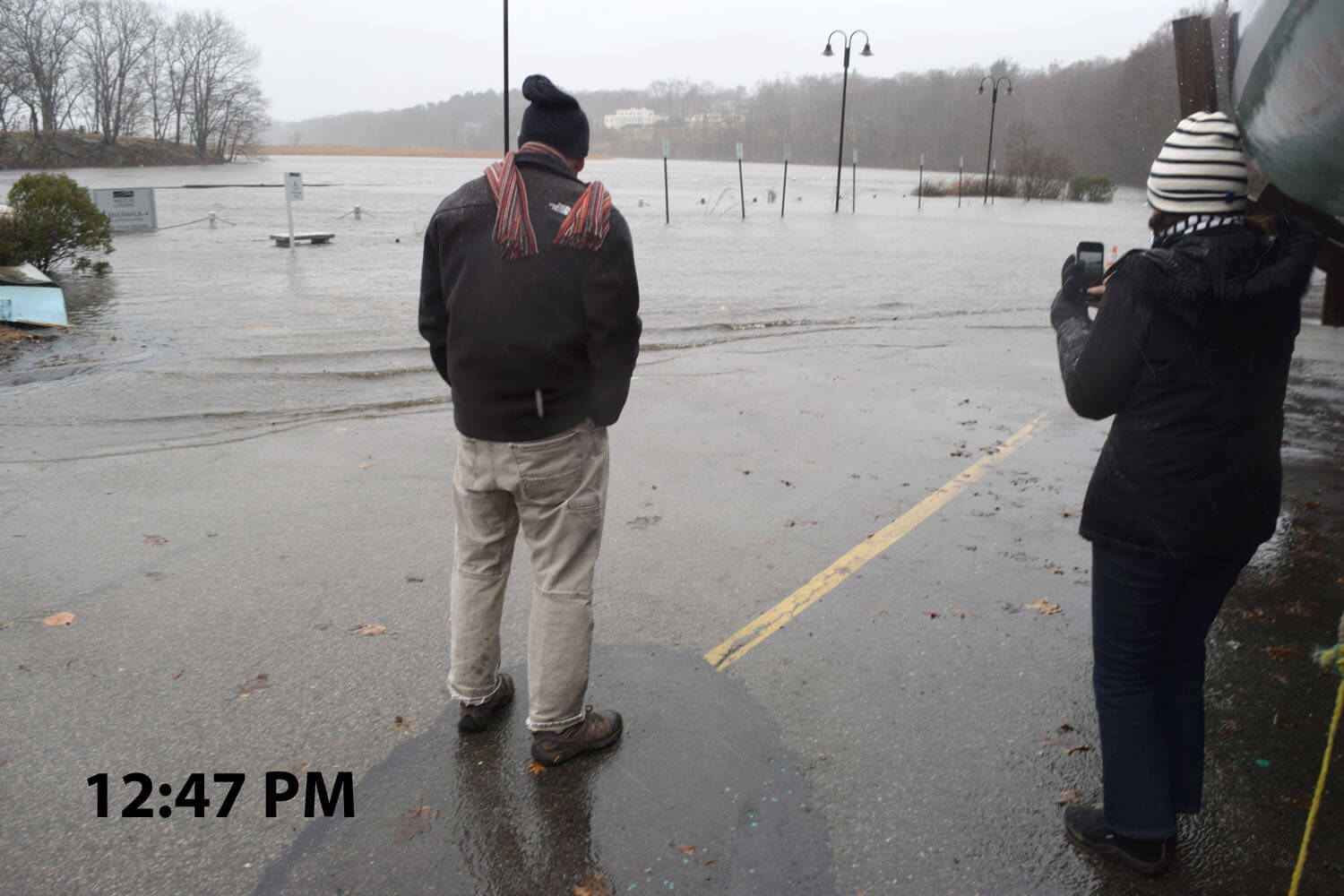 I tried to get to Granite Avenue but the police had blocked it at Squantum St: 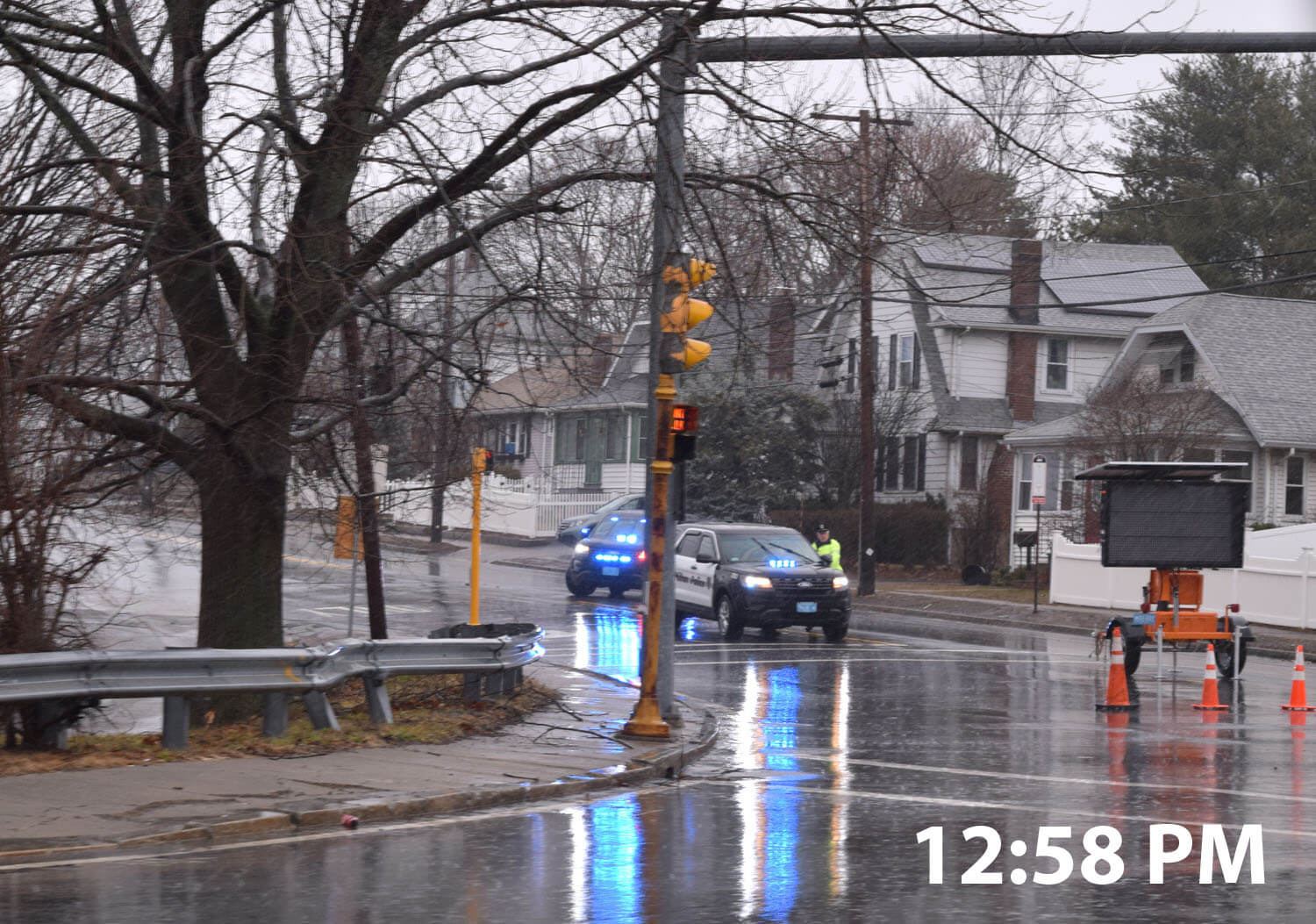 The closing meant that all the traffic from Dorchester trying to get on Rt 93 southbound was diverted to Adams St and Lower Mills, and I got stuck in it myself: it probably took me 40 minutes to get from Neponset Circle to Baker Square. Here you can see the backup heading south over the river at Lower Mills: 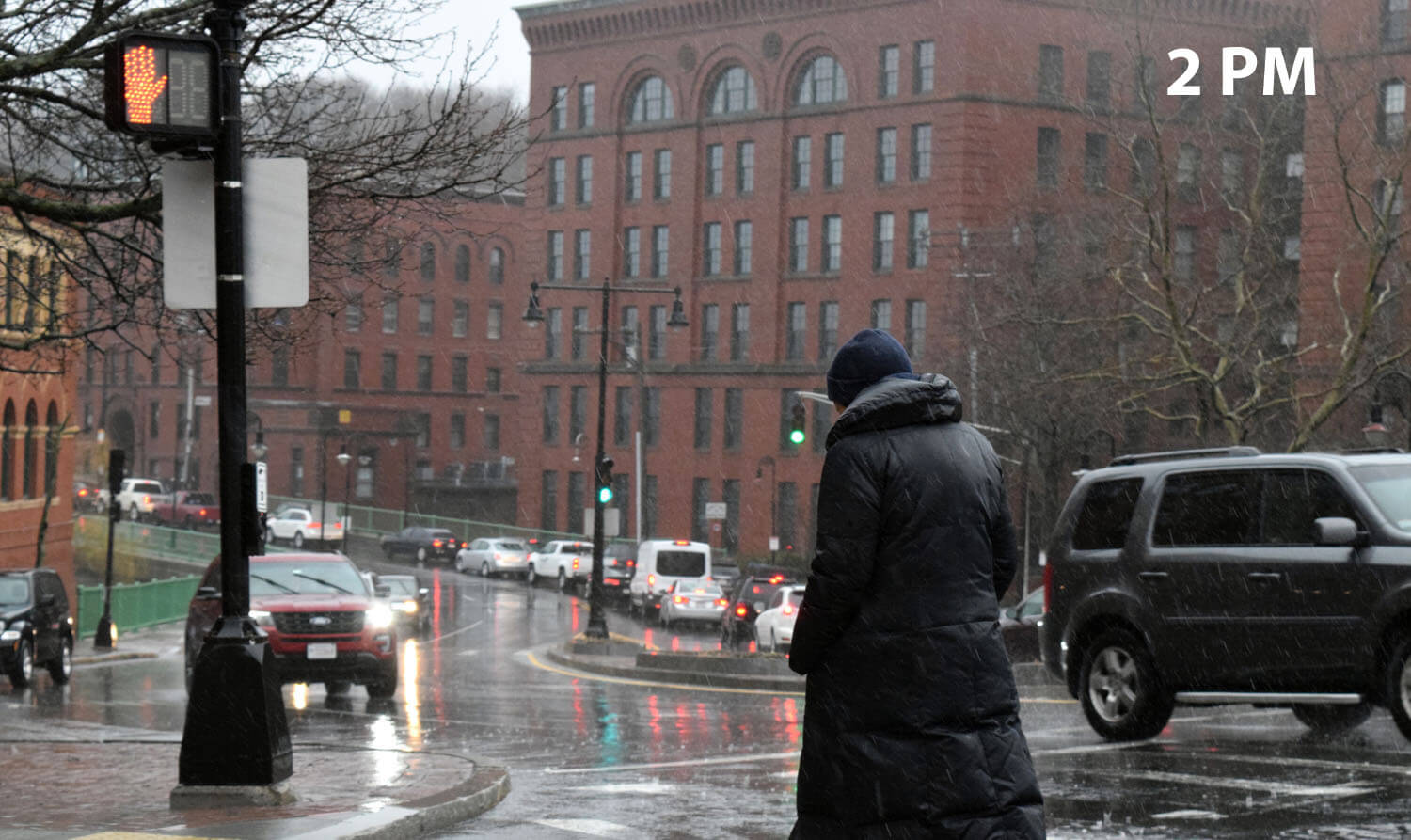 My congrats to Ian for finding a way to get to the right spots when it counted.

3 responses to “More Storm Photos: Riley in Milton and Quincy”