The June results are a bit worse than they were in May, but overall not terrible.

Despite the fact that the June data were also collected during dry weather, many more sites failed to meet water quality standards for E.coli, nutrients, and dissolved oxygen in June. Unfortunately, that pattern isn’t entirely unexpected, as water quality typically declines as the summer progresses. 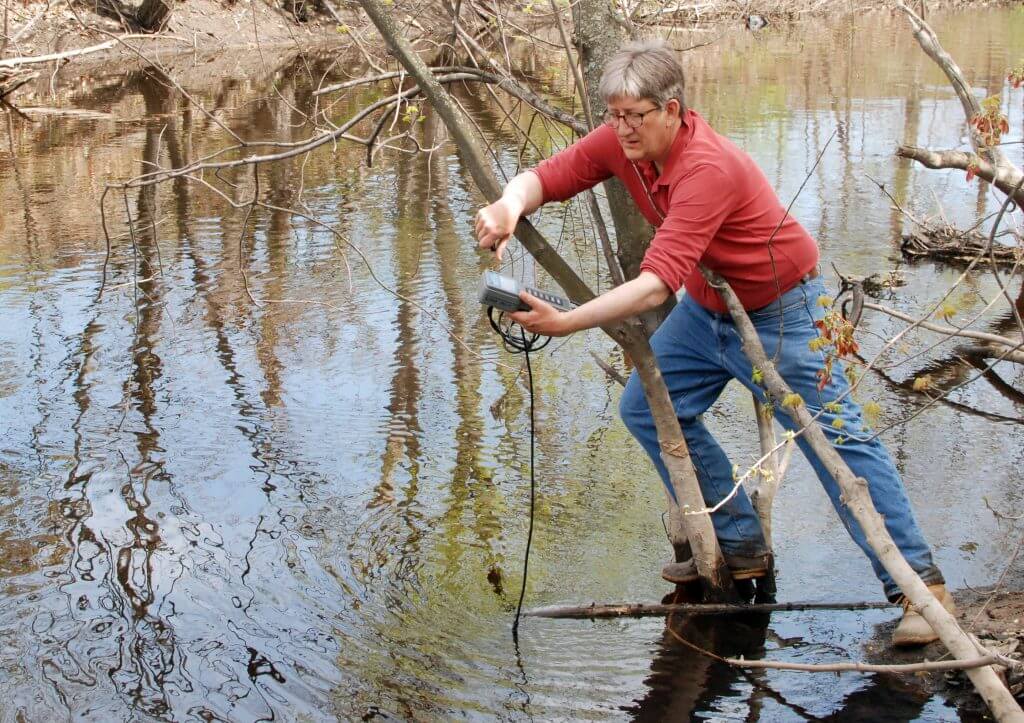 Of the sixteen sites that failed, Pine Tree Brook (Milton), Unquity Brook (Milton), Purgatory Brook (Norwood), and Meadow Brook (Norwood) were repeat offenders. All of these sites have been on-going issues in the watershed. Milton has been investing a lot of money in upgrading their stormwater infrastructure around Pine Tree and Unquity Brooks, and we are continuing to track down sewage issues that are affecting water quality in Milton. We’ve been investigating Purgatory Brook this year, but have been unable to locate any specific sources of contamination yet.

Sadly, it appears we may have jumped the gun on declaring Meadow Brook fixed. Last year was the first year in the twenty years that we’ve been monitoring the Neponset that Meadow Brook met swimmable water quality standards. This is a direct result of all of the tremendous efforts Norwood has been making to improve their sewer infrastructure. While Meadow Brook is still trending below the E. coli levels of years past, it has yet to meet swimmable standards this year. Check out the map below for the June results for all of the sites. 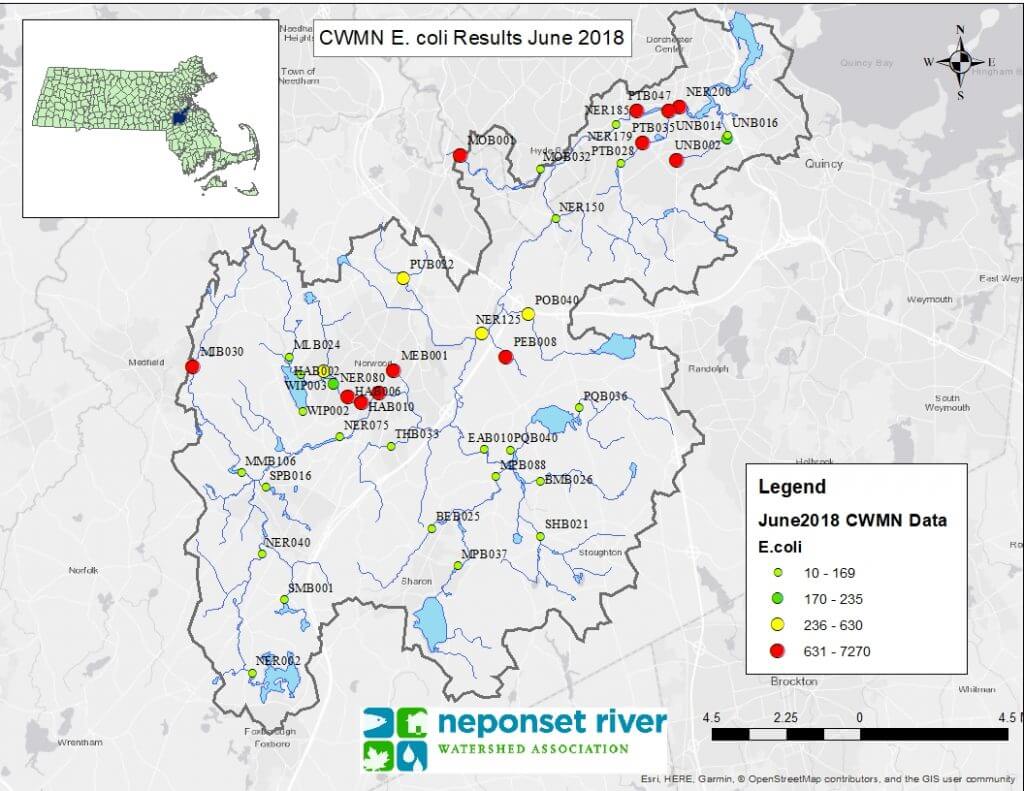 Other notable sites that were high for E.coli for the first time this month were Hawes Brook (Norwood) and upper Mother Brook (Dedham). At the time, flow had been almost completely cut off to Mother Brook from the Charles River for dam repairs downstream. This caused the upper section of Mother Brook to become a stagnant pool, turning the river bright orange and causing the dissolved oxygen to crash and the E.coli to spike. It doesn’t help that there is a major illicit discharge going into the brook from the Transfer station. We plan to investigate Hawes Brook this week to figure out if these results were an anomaly or the start of a new issue.

Dissolved oxygen is what fish and other aquatic animals need to breath under water. Warmer water holds less oxygen than cold water, so its typical for dissolved oxygen levels to take a dip as the summer progresses.

This month seven sites failed to meet dissolved oxygen standards that are considered healthy for fish and wildlife. That is up from one site last month. Surprisingly, none of the ponds, where we typically see dissolved oxygen problems, had issues in June. 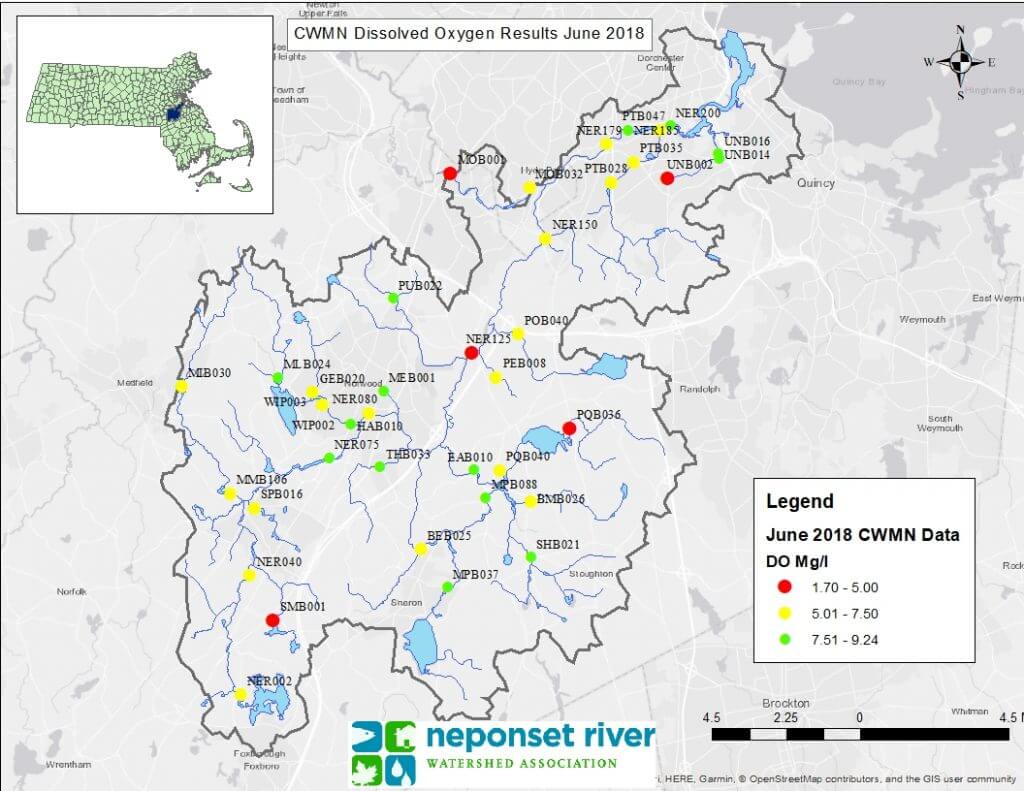 Phosphrous is a critically important nutrient for almost all plant life, however when nutrient levels are too high it can wreak havoc on aquatic ecosystems. This is a major challenge faced by the Neponset River.

In June, eighteen of the sites failed to meet Phosphorus standards which is up from just six in May. Warmer water can trigger the release of phosphorus trapped in sediments which can increase the amount in the water. June is also a popular month for people to fertilize their lawns and gardens. Fertilizer laden runoff is an important source of phosphorus in the Neponset. 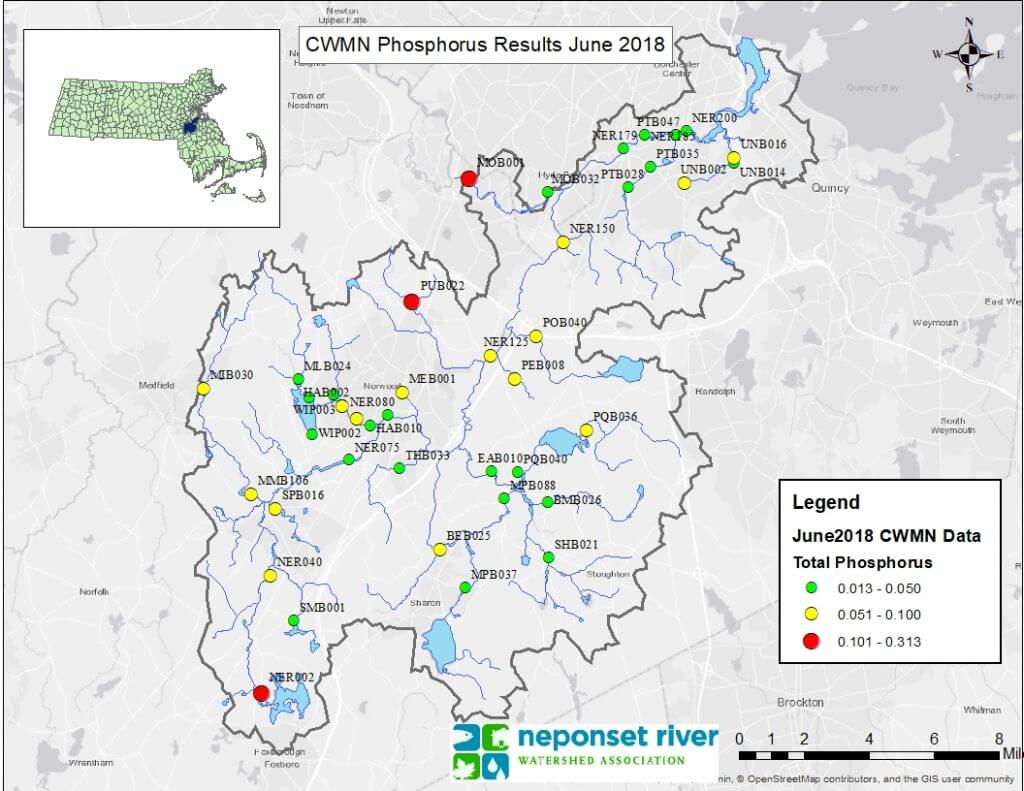 Thank you, to all the volunteers that dedicate their time to make this program possible!