Boston has experienced 11 inches of sea level rise over the past 90 years of record keeping. In the face of climate change, this trend is showing no sign of slowing down.

Feb. 2018– Until last month, the record for highest tide in Boston had been set 40 years ago, during the disastrous Blizzard of ’78, which flooded most of the Massachusetts coast. According to the website dedicated to it, the Neponset River played a role in the chaos by flooding I-93 in Milton, causing it to be completely closed off.

Last month’s “bomb cyclone” on January 4th sent freezing seawater surging into the Boston seaport, as well as into the streets of nearby towns of Hull, Scituate, and Quincy. The National Weather Service measured a record high tide of 15.16 feet (which is 4.88 above the area’s average highest tide), beating out the 15.1 feet set in 1978 years ago by the skin of its teeth. In the face of sea level rise, many people are asking: Is this something we’ll have to get used to? Could we see more of these record-breaking tidal surges in the coming years? The answer is, well, yes. 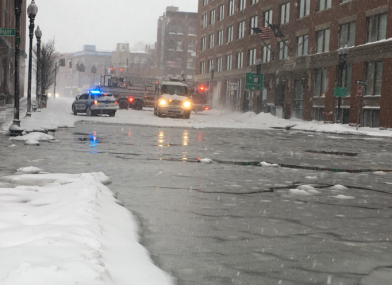 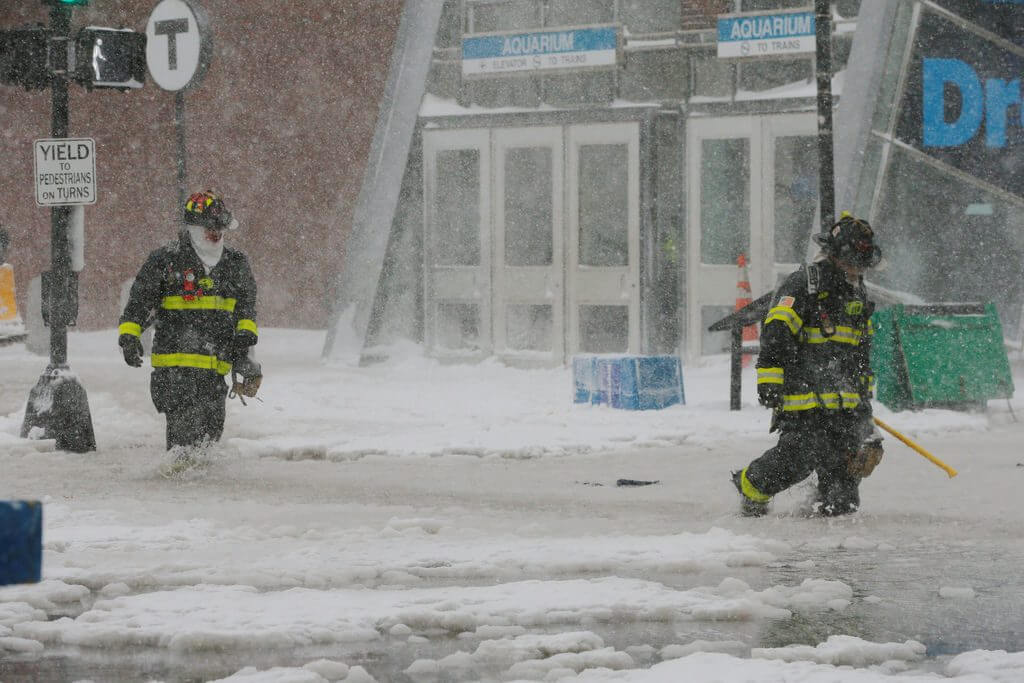 To understand what this really means, it’s first important to understand the distinction between global sea level rise, and local tidal fluctuations. On a global scale, sea level is rising steadily as a result of human-driven climate change increasing ocean temperatures. This warming of sea water causes the ocean to expand and the sea ice to melt. Locally, the rate of sea level rise depends on many factors, including long-term geological processes that contribute to coastal land slowly sinking. The overwhelming trend is clear – coastlines are receding.

Boston has already experienced 11 inches of sea level rise over the past 90 years that records have been kept. In the face of climate change, this trend is showing no sign of slowing down.

What would the world look like if ALL of the sea ice melted?

In Boston, we have what’s called a diurnal tidal cycle, meaning that we experience two high tides and two low tides per day. The 28-day lunar cycle dictates how extreme the highs and lows of the tides are. During full or new moons, when the earth, sun, and moon are all nearly in alignment, that’s when we get the highest (and lowest) tides. These are called spring tides, or more colloquially “King Tides.” Seven days after a new or full moon, when the sun and moon are at a 90-degree angle to each other, we get more muted tidal ranges, called neap tides.

The tides are entirely predictable. Storm surges – not so much. The timing of a storm relative to the height of the tide has everything to do with how much flooding occurs. Remember Superstorm Sandy in 2012? Aside from power outages and sections of road closures on Morrissey Boulevard (along the Neponset Estuary) and Quincy Shore Drive, the Boston metro area got away relatively unscathed. This is because Sandy hit about 5 and a half hours after high tide. Other communities along the East Coast were not so lucky.

What happens when a storm hits at an especially high tide? We experienced this exact scenario last month – extreme flooding. Sea level rise increases the starting point for high tides and storm surges alike. Projection models predict that sea levels in Boston will increase anywhere from 2-4 feet as early as 2070. This means that we should expect coastal flooding to become not only more frequent, but more hazardous too. 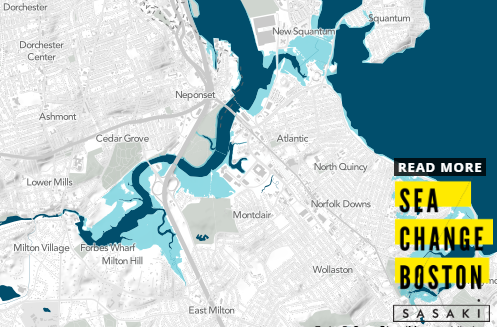 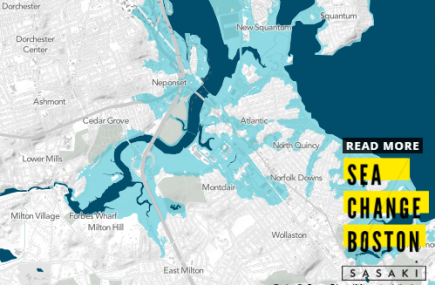 Top: Neponset in 2050 with 2 ft of sea level rise, based on future emission scenarios. Bottom: The same area in 2050 after a major storm brings 5 additional feet of flooding (like the one on Jan 4th). Credit: Sea Change Boston.

While this certainly paints a grim picture, the good news is that sea level rise is definitely on Boston’s radar. A comprehensive report was published in October 2017 that outlines Boston’s next steps in the battle against sea level rise. For Boston, the neighborhoods of Charlestown and East Boston are particularly susceptible to coastal flooding. The city plans to raise Charlestown’s Main Street by two feet, and construct a deployable sea wall to protect East Boston from storm surges. More long-term plans include creating raised public green spaces that double as floodplains. The city of Quincy also has sea level rise on its radar, especially after the huge cleanup effort following last month’s storm. Along the Neponset, Quincy is joined by Milton and Dorchester as areas at risk for coastal flooding.

The EPA published a report examining the potential costs of repairing damaged infrastructure due to coastal flooding. They estimated that with no adaptations like armoring coastlines or creating new floodplains, by 2100 the cost of coastal flooding could be a hefty $5 Trillion dollars nationwide. Costs with adaptations hover around $800 million. With an almost 6:1 ratio of cost, it seems that any investment in coastal flood risk mitigation is something that will pay off in the long run. 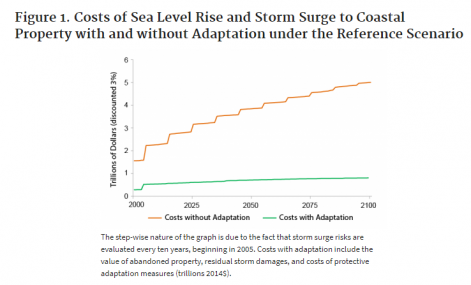 It will certainly take a lot of keen minds to figure out what the best solution for Boston is. In nearby Dedham Middle School, 8th-grade science teacher Sean Bowles has been teaching his students about climate change and our shrinking coastline. He tasked students with coming up with different ideas for flood risk mitigation. I had the opportunity to go see some of their plans. It’s heartening to know that the next generation of city planners and civil engineers could be right here in our watershed!

Thanks for having me, Mr. Bowles!

Boston is by no means the only city that needs to consider sea level rise as a serious threat in the coming years. The effects of climate change are going to come to the forefront of city planning all over the world. Each city will need to come up with the best approach for its specific risks and needs, and there will be plenty of ideas (good and bad) to be inspired by and learn from. Whatever solution Boston and surrounding towns come to, it’s clear that it will be worth the investment.

Read about the “bomb cyclone” here.