Unfortunately, many of the chemicals that were stored in the building were washed directly into the brook, and ultimately, the Neponset River.

On June 16th a huge fire broke out in a large abandoned building built directly on top of Hawes Brook in Norwood. The warehouse was most recently used for manufacturing soaps, and prior to that, was used for tanning animal hides. Leftover barrels and tanks containing dyes and chemicals from the building’s industrial past were still in the warehouse when it caught fire, around 11 pm the night before. The Norwood Fire Department fought the blaze through the night and into the next day, and out of necessity pumped an estimated one million gallons of water onto the building to extinguish the flames. 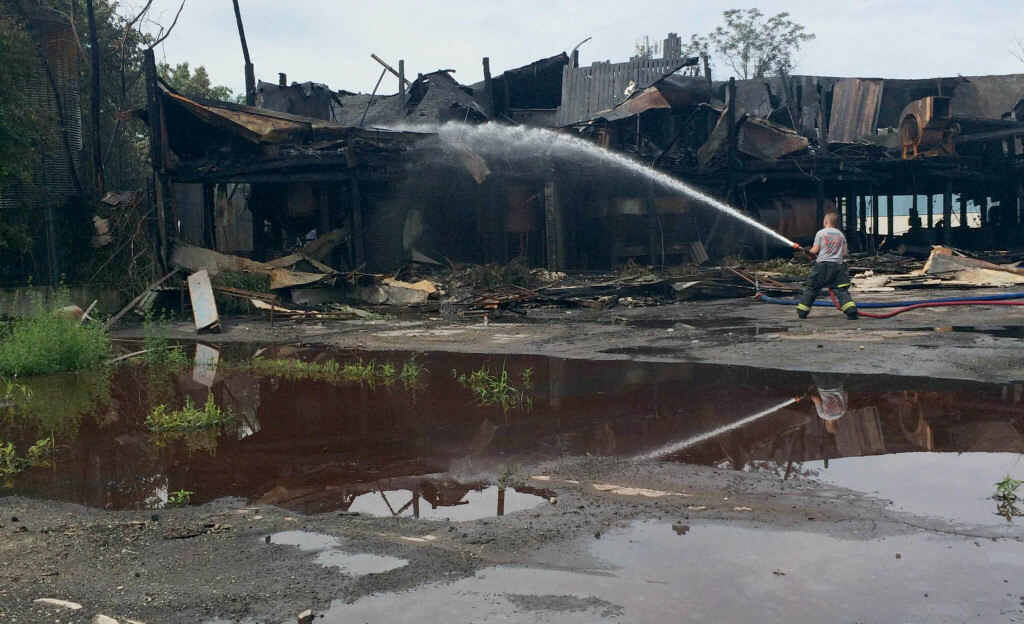 Contaminated runoff made it’s way into Hawes Brook, and eventually the Neponset River.

Unfortunately for the river and its fish, many of the chemicals that were stored in the building were washed directly into the brook that runs under the building, along with the super-heated firefighting runoff. As a result hundreds of fish were killed, and the stream was dyed bright red. While regulatory agencies have recently deemed the water to be safe for human contact, the lasting environmental impacts are still unknown, and the issues of fire related run off and hazardous material storage have been brought to the forefront of our attention.

June 16th was the morning of our second CWMN (Citizen’s Water Monitoring Network) mission of the year. As we were processing all of the samples that were coming in that morning, we noticed that the samples from Hawes Brook and the main-stem Neponset downstream of Hawes were a bright red color. Once all of the CWMN samples were processed and sent on their way to the lab, we decided to follow up and see if we could find the cause of the red water.

Shortly after arriving at Endean Park in Norwood, we discovered dead fish all along the banks and in the rocks on the bottom of Hawes Brook. Around this time, we learned that there had been a fire upstream the night before. We alerted NepRWA Executive Director, Ian Cooke, and he immediately reported the fish kill to the town of Norwood and MassDEP, who later brought in staff from the US Environmental Protection Agency and the MA Department of Fisheries and Wildlife.

NepRWA staff then followed the plume downstream into the Neponset Mainstem from its confluence with Hawes Brook, and found the river visibly discolored, as well as numbers of dead and dying fish, all the way down to Neponset Street in Canton—some four miles downstream.

If it wasn’t for our dedicated CWMN volunteers bringing this to our attention, the environmental impact of this fire may have gone completely unreported.

Since the fire, the EPA has secured the site by containing and removing the remaining runoff, preventing any further discharge into the stream; removing the remaining hazardous materials on site; and demolishing the building. They hired an environmental consultant to take five water samples from the site: two samples were taken from the pool of firefighting run off that was in the parking lot and slowly draining into the brook; two of the samples were taken from Hawes Brook downstream of the fire; and one sample was taken from Hawes Brook upstream of the fire. The samples were analyzed for a whole suite of heavy metals, volatile organic compounds, pH, direct mercury, and cyanide.

See photos of the site and areas downstream at our flickr.com page.

Based on these water quality results, the Norwood Board of Health, Mass Board of Public Health, Mass DEP, and Mass Fisheries and Wildlife concluded that the fish kill was, “the result of a rapid change in water temperature, turbidity, dissolved oxygen levels and other episodic issues related to the fire on Davis Ave.”

This means that there is a consensus among the organizations that whatever killed the fish was a one-time pulse and has since worked its way through the system and there shouldn’t be any long lasting effects. They also stated that, “there are no health risks associated with recreational exposure to the water in Hawes Brook” and that “fish populations are expected to regenerate from the upstream populations.”

I am somewhat skeptical of how well the five samples that were taken represent what was discharged during the fire. Firstly, they were taken at least 12 hours after the fire had started, and thus may not have captured everything that was discharged, as it is easy to imagine barrels rupturing at different times and discharging at different rates throughout the fire. The sample that was most likely to be representative of the discharge was taken from a pool of runoff on the parking lot, which may or may not have been receiving all of the chemicals that were discharged on site. The pH of the pool was elevated and contained toxic levels of cyanide, aluminum and chromium; all of which justify the conclusions made by the Board of Health, but I still wonder if there were toxins that were missed due to sampling limitations.

On one hand, the fact that there weren’t a lot of toxic chemicals found in the downstream samples several hours later lends credence to the conclusion that the contamination was episodic and most everything has worked its way through the system. However, I wonder about the possibility of contaminants having settled out into the sediments over that same time span. I would have liked to have seen some sediment testing done in response but, it would be difficult to pinpoint what in the sediments was a result of the fire and what was the result of decades of industrial activities on the site. Unfortunately, the EPA is satisfied with their results and thus isn’t planning to conduct any further sampling.

To me, the most frustrating aspect of the whole situation is how easily it could have been avoided. There had been a fire in the very same building weeks prior to the large blaze, and the Norwood Fire Department had raised concerns about the chemicals that they found in the building, but unfortunately not everything was cleaned up. I hope that this tragedy, if nothing else, shines a light on the need to audit all of the abandoned buildings located in the watershed, and remove and properly dispose of potentially harmful chemicals when they are discovered. 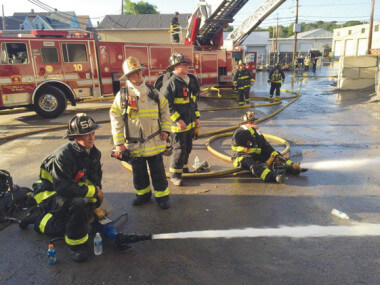 Only days after this event, two other fires that led to discharges into the river highlighted the problem of untreated firefighting discharges.

The first was a large blaze at a landscaping materials warehouse reportedly containing fertilizers and herbicides. A NepRWA volunteer witnessed multiple “streams” of firefighting runoff discharging to the river through storm drains and overland, though to the best of our knowledge, no testing was done and no effort was made to evaluate the impact to the river. The only firefighting water that was collected and properly disposed of was that which ponded on top of a storm drain that became plugged with debris.

The second smaller fire occurred on the fourth of July at the end of the pier at Neponset Landing along the Quincy Riverwalk. Though no chemicals were involved in this case, water and debris from the fire would have fallen directly into the river below.

As a response to the recent rash of fires, some have suggested that NepRWA should advocate for stricter bylaws to create buffer zones along the river, which would prevent businesses from being able to store toxic chemicals near the river.  I think that this is a great idea. It is worth pointing out however, that any building that is served by storm drains, no matter how far from the river, is just as much of a risk.

I would suggest that maybe we need to rethink our emergency response to fires when hazardous materials are involved. Obviously public safety and controlling the fire are the top priorities, but simple steps like sandbagging around storm drains and using vacuum trucks to remove and dispose of contaminated runoff while the fire is being fought could be a win-win for public safety and the environment.