The 2020 sampling was done during the summer to document the distribution of brook and brown trout during the warm and dry ‘stressful’ months.

In 2021, we plan to sample during the spring to see how the distribution changes seasonally in times when stream temperatures are cooler and there is more water. 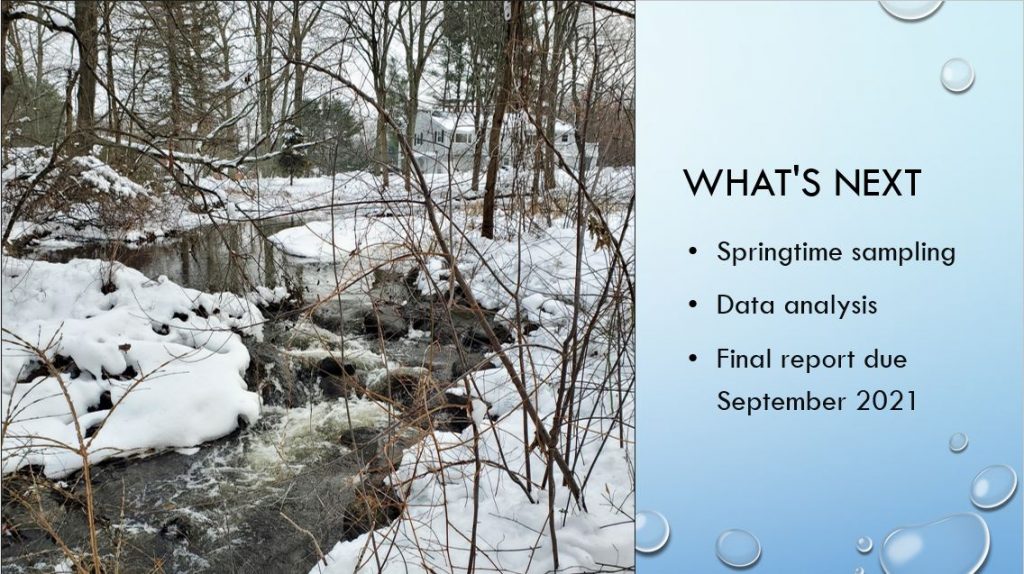 In addition to sampling for brook and brown trout eDNA in the same locations as in the summer of 2020, during our springtime fieldwork, we plan to conduct habitat surveying in a few key locations and additional eDNA sampling in sites that were not sampled in the summer. 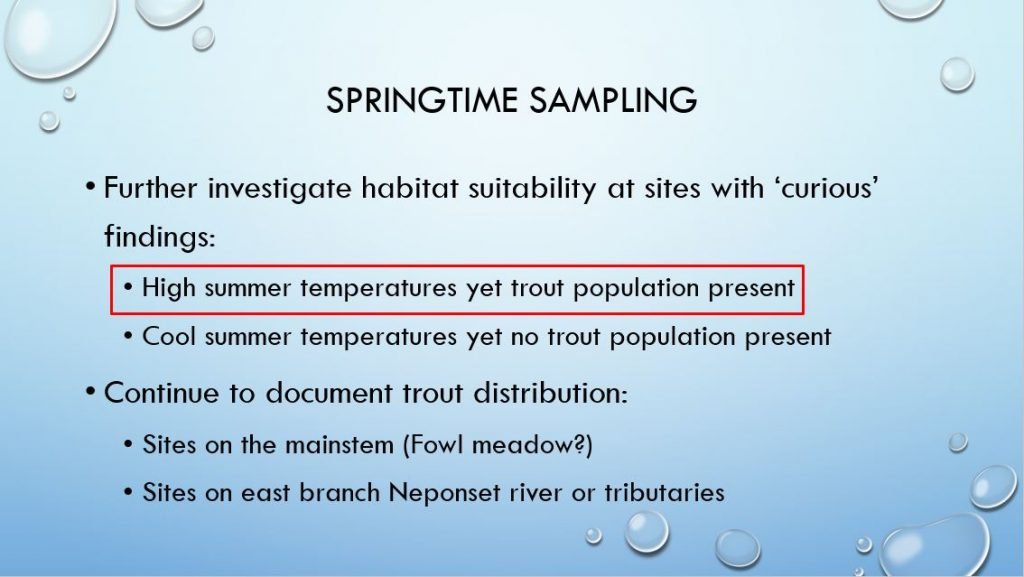 In places where we found evidence of trout and warm temperatures, we will do additional temperature monitoring to identify differences in stream temperature within various microhabitats that occur across the stream – pools/riffles/runs, main channel, and edge waters, and shaded vs unshaded sections of the stream. 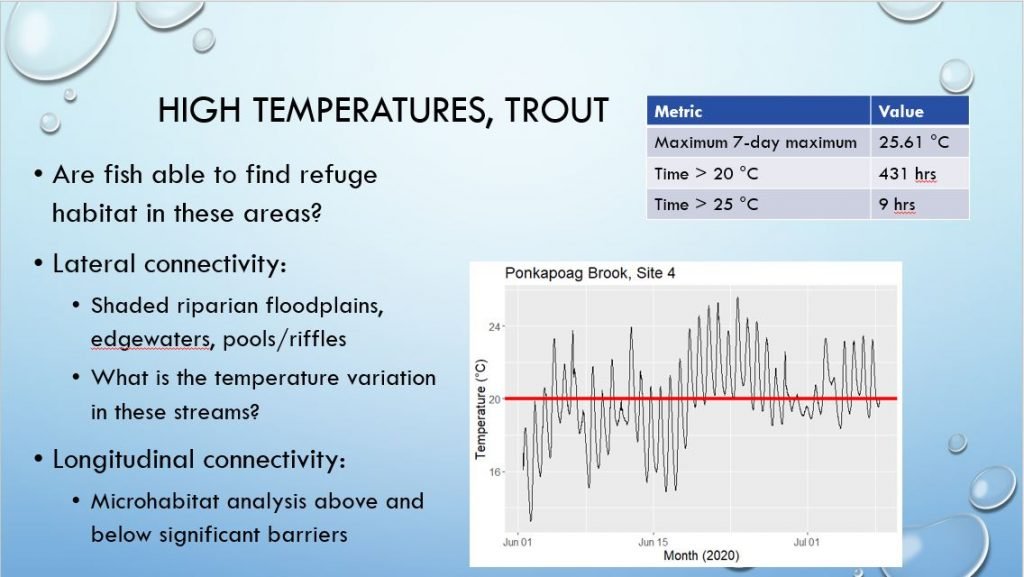 We hope this will tell us if there are temperature refuges that the trout can access when the temperatures heat up, or if they are in fact stuck in stressful conditions all summer. We will also do bank side surveys walking up-and down-stream to determine if temperature refuges are accessible, or if barriers are blocking access.

Lateral connectivity: the connection of a stream’s main channel to the edge waters, backwaters, and floodplain. This would be disrupted, for example, if concrete or riprap channelized stream edges were constructed, or even when landscaping is done right up to a stream edge. 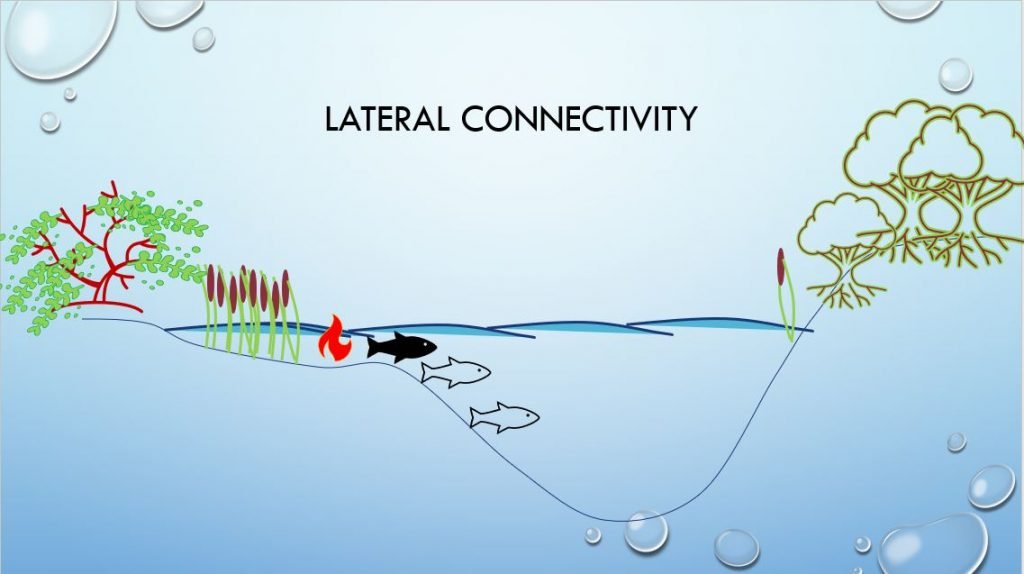 Longitudinal connectivity: the connection of the stream from the headwaters to the estuary. This is required for fish to migrate the length of the stream.  Unnatural barriers, such as dams, diversions, and undersized culverts disrupt longitudinal connectivity, preventing fish from accessing habitat on the other side.  Some barriers can be natural also, such as large waterfalls or high step pools that prevent fish passage. 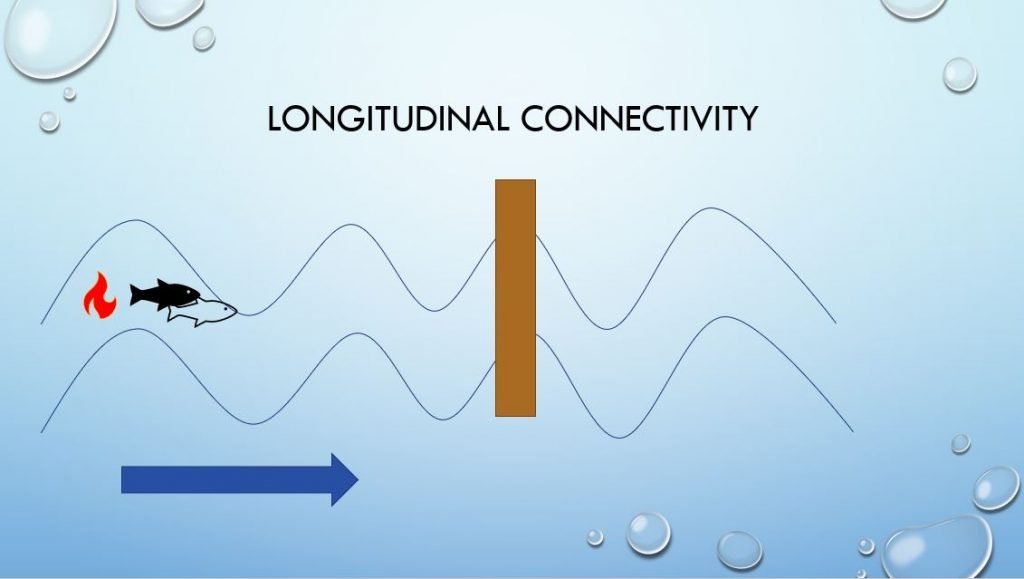 We will also do some additional surveying in locations where the summer 2020 fieldwork identified locations with cool water through the summer, but no evidence of trout presence. In these sites, we want to identify the reasons that trout are not using what could be considered a thermal refuge site. The example shown below is Tubwreck Brook.  Reasons could include: 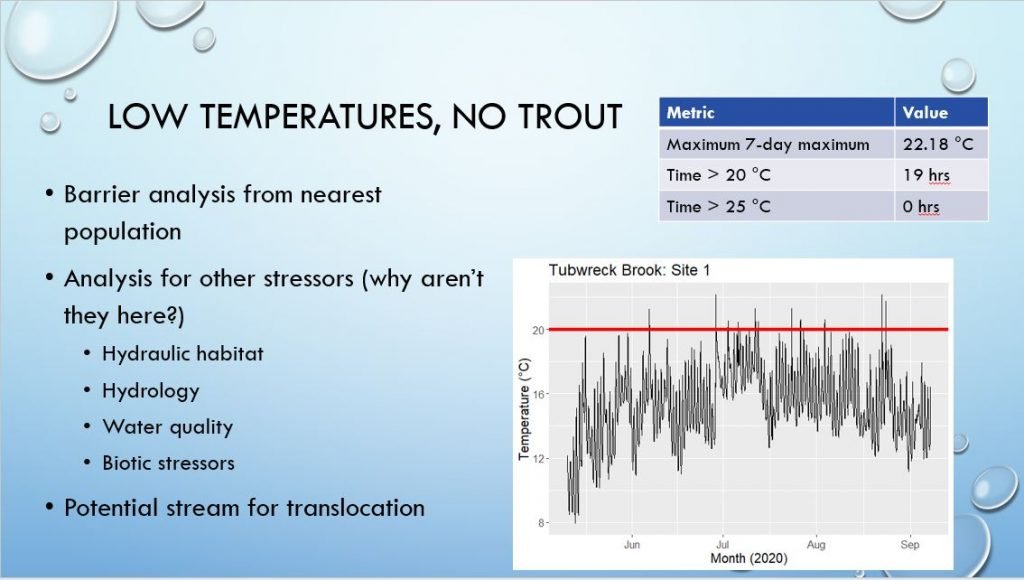 The example shown for Ponkapoag Brook (below) was a site that had a strong brook trout signal, but as shown in the slide, also experienced quite high temperatures throughout the summer.

We will sample the other streams because it’s possible they also have cold-water refuge areas (despite not being labeled cold water streams) and we want to fully document the brook trout distribution within our watershed! 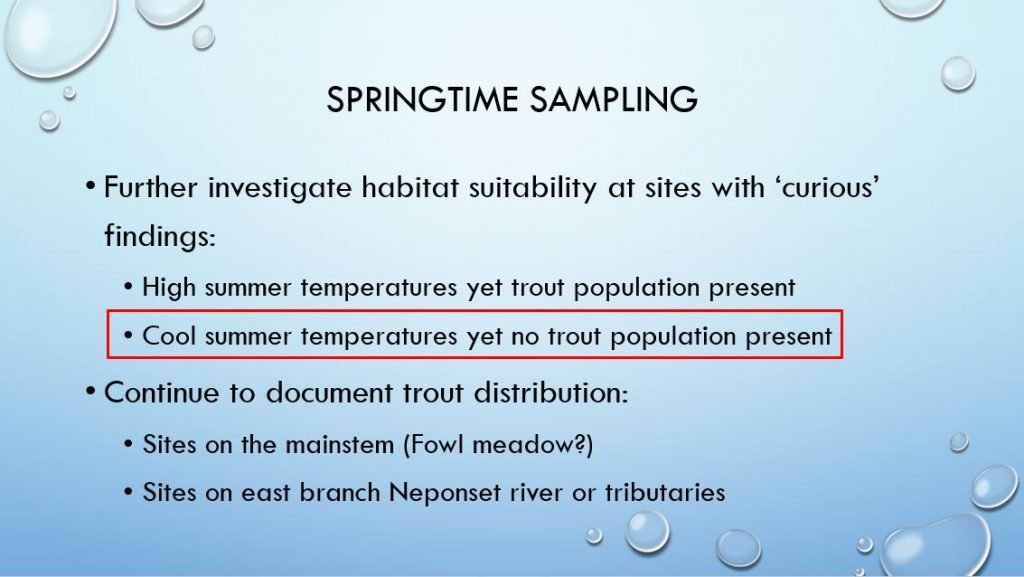 Finally, we want to conduct eDNA sampling in regions that were not sampled in summer or 2020 (which was focused only on the cold-water streams). 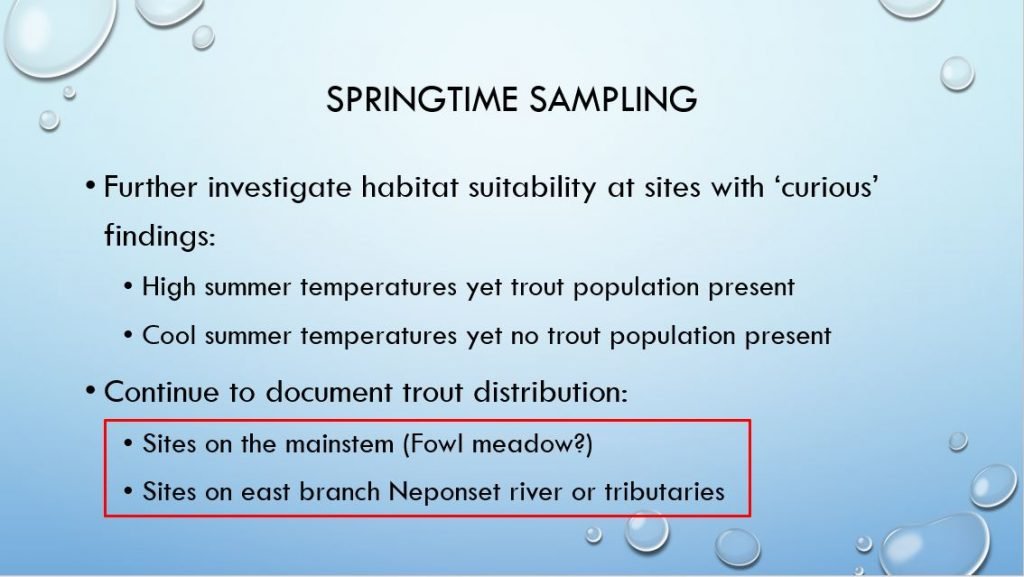 We want to look at the mainstem because there were strong eDNA signals found at a tributary confluence with the mainstem where no barriers between the mainstream and the tributary exist. 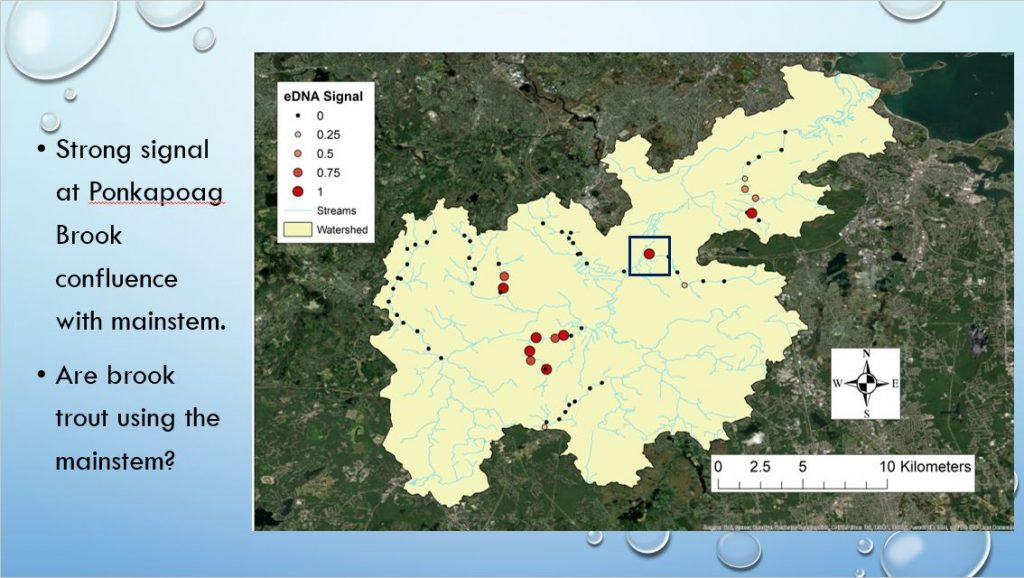 This could suggest that the trout are using the mainstem as a migration corridor between tributaries (and started up this particular tributary but never got far due to warm temperatures and barriers farther upstream— just a hypothesis!!!). 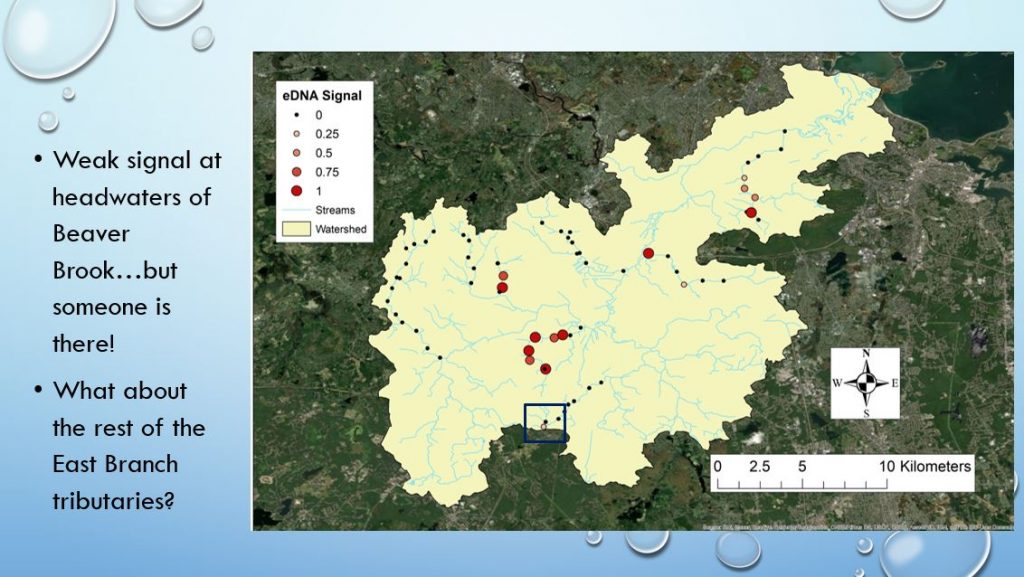 A mainstem that is suitable for the migration of fish would help populations in different tributaries interact and could help re-establish a population in a tributary if conditions one year caused the local population to die out. 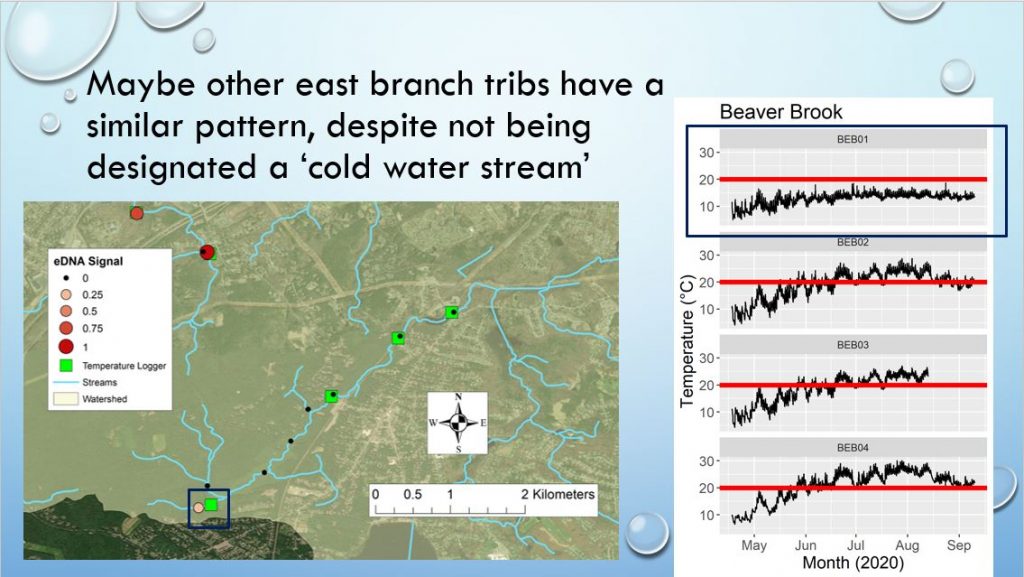 What’s next: we will put together a final report detailing restoration plans and future study plans for the streams and brooks assessed during this project. 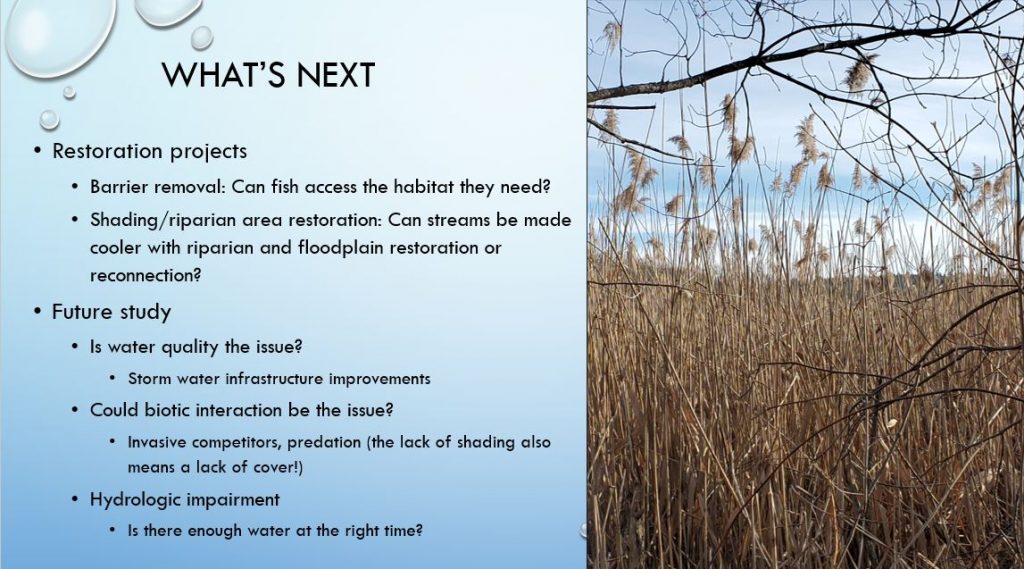 Great outcomes of the Embrace-A-Stream efforts include many future collaboration opportunities with GBTU, possibly changes in stream designations, and ecological benefits to brook trout and all in-stream communities. 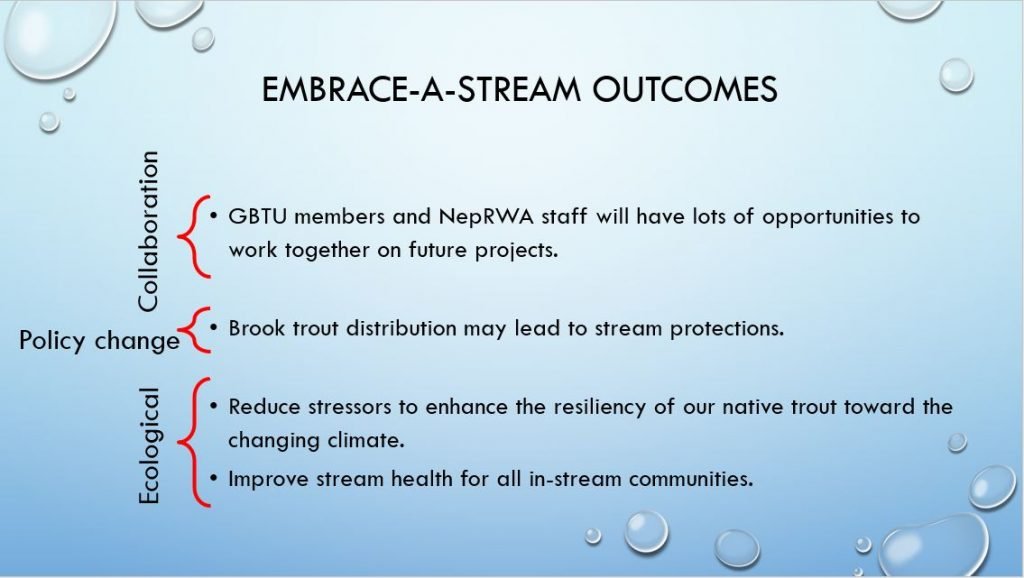 There is tons of field work to be done this spring – please contact us to get involved!!! 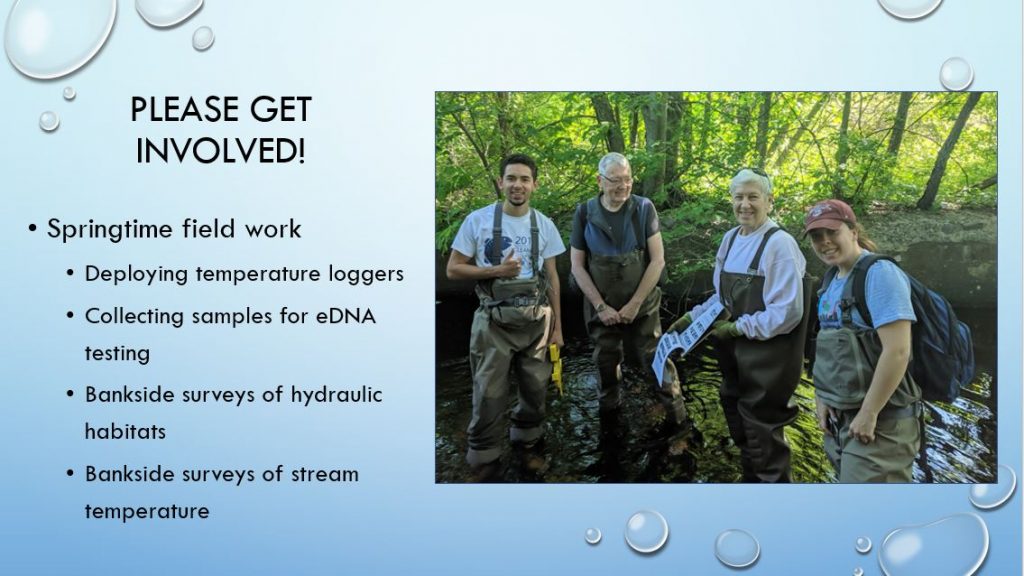 Thank you to our volunteers, donors, and University of Maine, Evolutionary Applications Lab!!! 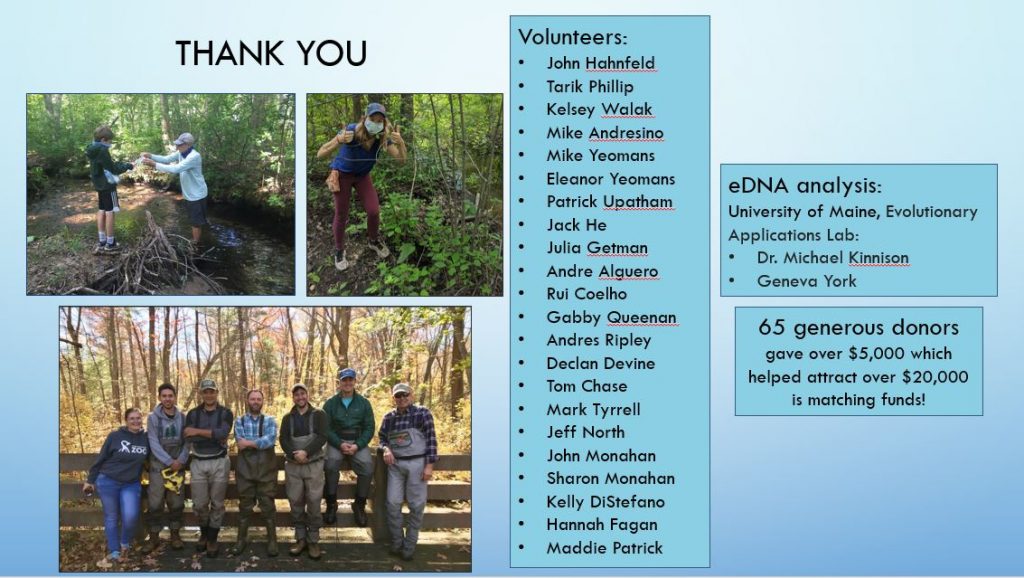 Special thanks to Greater Boston Trout Unlimited and the Foundation for MetroWest for supporting this important initiative.