Following is a press release from Commonwealth of Massachusetts Executive Office of Energy and Environmental Affairs.  See original document.

BOSTON – July 8, 2016 – Following four continuous months of unusually dry weather, Energy and Environmental Affairs (EEA) Secretary Matthew Beaton today declared a Drought Watch for Central and Northeast Massachusetts and a Drought Advisory for Southeast and the Connecticut River Valley. The declaration was the result of a recommendation issued from a recent meeting of the Drought Management Task Force, comprised of state, federal and local officials, and will remain in effect until water levels return to normal in the affected regions.

“Drought conditions can contribute to lasting agricultural, environmental, and economic impacts, and also raise serious public safety concerns,” said EEA Secretary Matthew Beaton. “This drought declaration is an important tool which will help officials on all levels of government to work together to ensure we take action where necessary, and we advise all residents to conserve water and take increased care with any outdoor burning such as campfires and disposal of smoking materials.”

“If these very dry conditions continue through the summer months, the threat of wildfires will become even greater,” said Massachusetts Emergency Management Agency (MEMA) Director Kurt Schwartz. “To that end, we remind our residents and visitors to continue to not only conserve water, but also utilize extreme caution when dealing with outdoor burning.”

A Drought Advisory, the second of five levels of drought conditions outlined in the Massachusetts Drought Management Plan, indicates a level of dry conditions that warrants closer tracking by government agencies.  The decline of the state’s rainfall in the Connecticut River Valley, Central, and Northeast Regions since March led to the drought condition, with cumulative precipitation deficits of four to five inches below normal for the months of April, May and June.  For the months of May and June, precipitation was less than 61 percent of normal in the regions under Drought Watch and Advisory. Data from the state’s groundwater, streamflow and reservoir monitoring network show very low levels for the beginning of July. Seventeen streams across the four regions impacted by drought have registered record-low flows for early July.

A Drought Watch, a higher degree of drought, represents extremely low groundwater and streamflow levels resulting from a precipitation deficit of nearly ten inches over the past 12 months, including a lack of snowfall in the winter months.  The declaration of a Drought Watch warrants detailed monitoring of drought conditions, close coordination among state and federal agencies, and technical outreach and assistance for the affected municipalities. 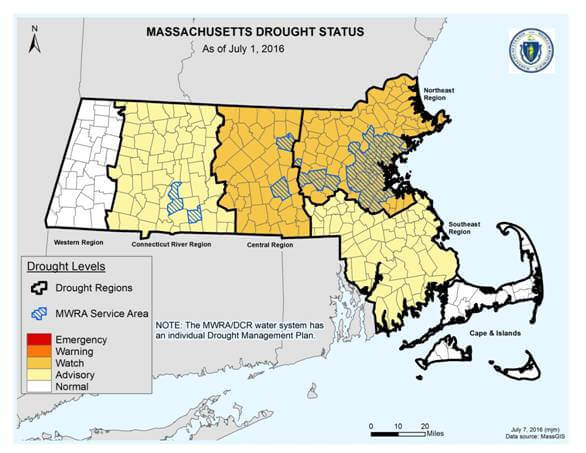 “The lack of rainfall leaves many public water supplies at reduced levels and puts a strain on water infrastructure as water use increases just as the supply becomes more limited,” said Philip Guerin, Director of Water and Sewer Operations for Worcester Department of Public Works & Parks. “Residents and businesses need to heed water use restrictions and take steps to fix leaks and limit non-critical water use to assure adequate supplies for health and safety in the coming months.”

Task Force officials noted that while some smaller reservoir systems in Drought Advisory areas are low for this time of year, the Massachusetts Water Resources Authority (MWRA) supply system is well above any drought conditions within its individual plan. Additionally, public water suppliers around the state have issued conservation measures in response to the dry conditions.

The declaration of a Drought Advisory and Drought Warning requires the Drought Management Task Force to meet on a regular basis to more closely assess conditions across the state, coordinate dissemination of information to the public, and help state, federal and local agencies prepare any responses that may be needed in the future. The Task Force will next meet in August.

How is the Neponset River doing?

In-stream flow is a critical indicator of a river’s health, especially during periods of flood or drought. The USGS monitors streamflow continuously at five key locations around the Neponset Watershed.  Check real-time streamflow data here.

2 responses to “Drought Watch & Advisory Issued for Portions of MA”