Clean up of Toxic Waste Site In Port Norfolk 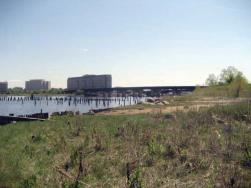 A 14-acre waterfront parcel in Port Norfolk, once home to the Shaffer Paper company, will be transformed into a public park. Image courtesy of Dorchester News.

The state Department of Conservation & Recreation (DCR), which owns the land along the Neponset River and long ago promised to clean it up and turn it into a park, has finally come up with the funding to make this a reality.  The site suffers from contamination by heavy metals and PCBs in the soils, and in the sediments along the Neponset shoreline.  The public comment period on the plan is now closed, but both the Port Norfolk Neighborhood Association and the Neponset River Watershed Association have submitted largely supportive comments.

Port Norfolk is a quiet, lovely historic working class neighborhood cut off from the rest of Dorchester by the Central Artery. It sits alongside the Neponset Estuary, near where the river discharges into Dorchester Bay. The people of Port Norfolk have been extraordinarily patient as other toxic waste sites have been cleaned up in Dorchester (including the one that is now Pope John Paul II Park), while the site in their neighborhood repeatedly kept getting pushed down the list for cleanup funding. Last year, one older man told DCR that he’s had to watch his children and now his grandchildren play at the abandoned site, even though there is a (not a very kid-proof) fence surrounding it.

The Port Norfolk Neighborhood Association, along with the Neponset Watershed Association, asked DCR to restore the natural ecology and habitat of the waterfront parcel, with only a walkway for public access, but no active recreational facilities.  DCR has acceded to our wishes. The appreciation of the people of Port Norfolk for their natural environment is very impressive, commendable and, frankly, most unusual. Our hats off to them!