On Thursday morning (6/17) three of our water quality sampling volunteers brought back bottles of red water. As soon as they saw the samples, Chris, Meghan and Anthony (our Environmental Scientist, Sampling Coordinator and Summer Intern) went out to investigate and quickly discovered that Hawes Brook in Norwood was red, and full of dead fish. 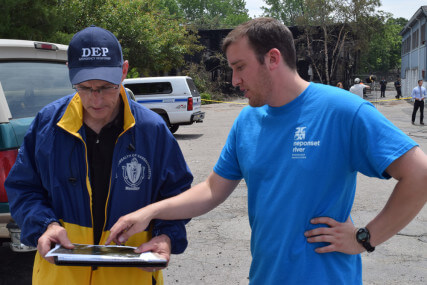 Within a few minutes, we discovered that there had been a fire Wednesday night at an abandoned industrial facility in Norwood next to Hawes Brook, a tributary of the Neponset River. Water applied to the fire had carried a variety of unknown chemicals into the Brook.

We immediately contacted MassDEP, though at this point the fire had been ongoing for eight hours or more. DEP called in the US EPA and Mass Division of Fish and Wildlife. The fire was continuing to smolder through Thursday and was only fully extinguished on Friday morning. Unfortunately, during that time, water was still being applied to the site, and while we had argued that the runoff should be directed into the sewer, the officials managing the site decided it should continue to go into the brook.

See photos of the site and areas downstream at our flickr.com page.

Representatives of Mass Fish and Game and MassDEP were onsite to document the impacts, and EPA called in a contractor to take some samples. Because it did not appear that anyone was going to inspect the areas further downstream of the brook, Meghan, Anthony and Ian proceeded to paddle and wade approximately three miles downstream along the River to Neponset Street in Canton, and found many more dead and dying fish and lots more red water all along the way.

By the time we reached Neponset Street in Canton there were fewer dead fish and the red color of the water was less obvious, but when we reached the confluence with the East Branch, there was still an conspicuous difference in red color between the two flows of water at 3:30 PM Thursday.

As of mid-day Friday the fire was finally out. The Town of Norwood was preparing to make an emergency appropriation to take down the remainder of the building and clean out the remaining chemicals in the basement, but apparently EPA has now stepped forward and agreed to shoulder that cost.

A volunteer rower out on the river at Lower Mills reported a sheen or scum on the river Friday morning, so it would appear that the spill is slowly making its way out of the river and into the harbor.

Apparently there was a smaller fire at this same property a few weeks ago, but the stored chemicals were either not identified or not addressed at that point.

It remains to be determined whether there may be any residual component of the pollution lingering in the sediments that may need to be remediated. It also appears that any sort of public notification beyond the boundaries of Norwood was spotty at best and primarily a result of media coverage. Apparently sample results will come back to EPA early next week, which should shed additional light on the situation.

The Watershed Association will work to ensure that the impacts of this event are fully documented, that any necessary downstream remediation is fully implemented, and that the responsible parties are ultimately held accountable.