Ian Cooke, Executive Director, March 31, 2014 — While most of us were tucked comfortably in our beds during Saturday night’s cold rain, an intrepid group of volunteers was outside in Milton, flashlights in hand, getting soaked, frozen, but very happy. The volunteers in question included Win and Denise Swenson, Carol Hayes and Martha McDonough, along with Randy and Isabelle Scott, among others. They were searching along Hemenway Drive in Milton for signs of the spring salamander migration, when the cute little critters emerge from dry, underground, woodland lairs where they while away cold winter nights, to march downhill into vernal pools where they will mate and lay eggs to launch the next generation.

The migration of salamanders to their vernal pools is one of the most extraordinary rites of spring in New England. It happens on the first relatively warm, rainy night of spring and it’s something everyone should see at least once in their life. 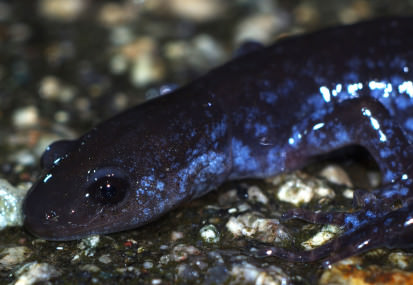 Saturday night, the Hemneway Drive volunteers were successful, finding three blue spotted salamanders as well as several red-backed salamanders, a four-toed salamander, and plenty of spring peepers, all on the move under cover of darkness. You can read more about the outing at timdotcom’s blog.

The blue-spotted is of particular interest, because it is recognized as a state listed “species of special concern” and was found in the middle of the area where a developer has proposed to build a 278 unit apartment complex under the state’s 40b affordable housing law.

It’s not a surprise that the blue-spots were found on the site, as the property is part of the Fowl Meadow Area of Critical Environmental Concern and most of it is mapped by the state as high priority wildlife habitat.

The Milton Mews Project has yet to file its next round of permit applications with the Milton Zoning Board of Appeals after receiving preliminary approval for financing from Mass Housing last fall. The degree to which the documentation of blue-spotted salamanders on the site will influence the ultimate development of the property remains to be seen, but may well turn out to be significant.