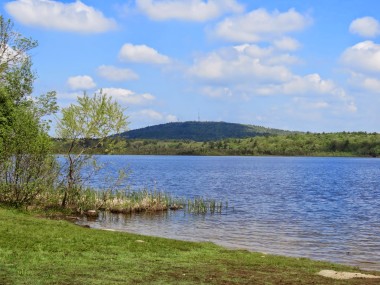 A hot, humid day in late-spring found me in our Boston home, envisioning our youngster running around on a peaceful beach. I wondered how best we could leave our city environs to revel in open space and a peaceful water vista, but not spend a lot of time in the car.

I considered one site after another, and ultimately, Ponkapoag Pond in Canton, in the Blue Hills Reservation, came up the winner. In my experience, Fisherman’s Beach at Ponkapoag doesn’t tend to get crowded (at least after work, on a weekday) – whereas surely, nearby Houghton’s Pond would be full of people trying to get cool. So, off we drove to Ponkapoag, eventually parking at a dirt parking lot off Randolph St.

Once we’d left the car, I realized we were missing something important and new to us for the season – mosquito repellent! Thankfully, the mosquitoes dissipated as we neared the water.

A couple of dogs paddled around in the pond, close to shore – one even seeming to chase fish. Their people called to them and chatted with us, too. My companion perched on a rock, baseball cap shading his face, grinning as he watched the dogs clobber each other as they chased down frisbees.

We waded into the shallow water. I pointed out sunfish gliding beneath the water’s surface and a common whitetail dragonfly darting above. A frog called every now and again from the marshy edge of the beach. We’d stop and listen until the frog called again. And, although I was engaged by these animals and could watch them at length, my companion was more fascinated by the dogs’ antics.

We returned to the beach and ate a snack. As my companion watched the dogs, I looked over the young Purple loosestrife shoots that surrounded us, noticing that holes already had been chewed in their leaves by Galerucella beetles, who also were visible, perched on leaves.

Just a few years ago, NepRWA, with DCR and a strong corps of volunteers, raised and released Galerucella beetles to control exotic, invasive Purple loosestrife in Fowl Meadow and at Brookwood Farm.  Click here to learn more.

Once we’d had enough of the bright sun, we got back in the car and headed to another spot in the Blue Hills Reservation – the outdoor animal exhibits behind the Blue Hills Trailside Museum in Milton. We strolled along the paved path in the shaded woods, watched a stream (a grackle wandered along the water’s edge) and a pond (sunbathing turtles!), watched an otter, snowy owls, white-tailed deer, bald eagle, red-tailed hawks and turkey vultures. On our way back to the car, we even spotted a hummingbird at the hummingbird feeder and a chipmunk foraging nearby. – Another pleasing spot for a family on a hot day!

What a satisfying afternoon adventure!