Water quality continued to decline as the drought worsened over the summer. 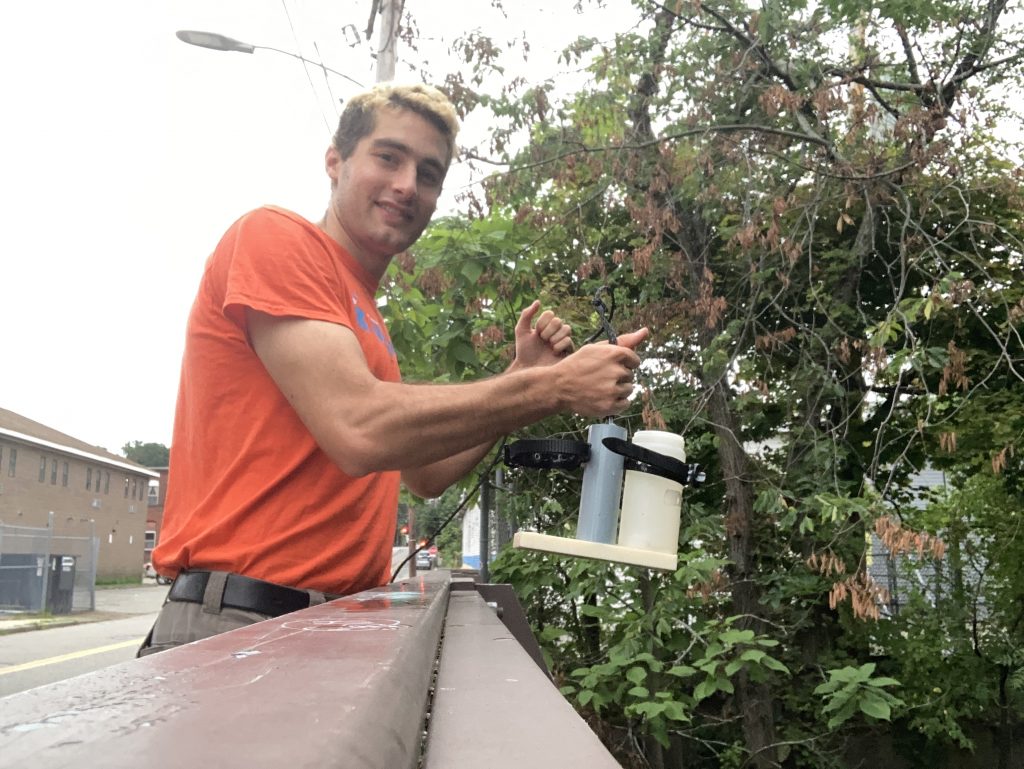 Thank you to all of our Community Water Monitoring Network (CWMN) volunteers who braved early morning collections, summer heat, drought, and early fall chills to collect these important water samples.

With the latest set of results back from MWRA, we’re able to provide an update on the end of the season.

For any questions about the August and September CWMN results, please email NepRWA Environmental Fellow, Eleanor Yeomans, at yeomans@neponset.org

The following data comes from water samples taken from 41 sites in the Neponset River Watershed by our CWMN volunteers. While informative, it’s important to keep in mind that this data only represents a snapshot of the water quality when it was collected.

Overall, water quality continued to suffer as the drought got worse over the summer. Although September and October started to see more rain, the impacts of the drought were still being felt. We saw dissolved oxygen decline and E. coli levels climb as water levels dropped and became stagnant. August phosphorus values were high, and although September values dropped in our streams, they remained high for our ponds and lakes.

E. coli is a type of bacteria that lives in the intestines of healthy animals, including humans. Its presence in water is evidence of waste contamination. Typical sources of E. coli include leaking sewer infrastructure and bird or dog feces. High levels of the bacteria associated with this waste can make people sick. Wet weather tends to wash a lot of pet and animal waste into our streams.

August saw some poor conditions in our streams, with only 18/41 sites (43%) remaining safe for swimming, which was better than July. Recreation was still possible, with only 7 sites found to be unsafe for boating. August sampling followed a little rain on Tuesday the 9th, showing how wet weather conditions can increase E. coli levels from stormwater runoff. You can do your part to help limit street runoff by picking up after pets and directing water across grassy areas instead of directly into storm drains.

In September, the sampling day again followed heavy rain 48 hours before, making our E. coli data worse, with only 11/41 (27%) sites safe for swimming. The intense rain following dry periods likely made the impact of runoff worse and flowing into streams already in poor condition because of the drought.

Phosphorus is a key nutrient for proper plant growth. Fertilizers, when used incorrectly, can contain high levels of phosphorus and when it is washed off lawns via rain, they can end up in streams and ponds. Phosphorus fertilizers are regulated within the Neponset River Watershed to help lessen these types of phosphorus loading. Other sources include organic material, pet and animal waste, and even car exhaust. Too much phosphorus can lead to harmful algal blooms, cyanobacteria blooms, and fish kills as oxygen levels drop.

Total phosphorus levels were high in August, with 20% of the sites tested having phosphorus levels above EPA standards for streams, and all of our lake samples above the criteria for lakes. Phosphorus levels typically increase over the summer, as the weather gets warmer. This increase is largely the result of high water temperatures and low dissolved oxygen, leading to a chemical reaction that releases phosphorus from lake sediments. Another factor is phosphorus-rich organic material such as leaves and pollen washing off paved surfaces and into storm drains.

In September however, we saw phosphorus levels go down at most sites, though 1 stream and 3 ponds failed to meet EPA standards. It’s interesting to see how the levels fall so dramatically and try to figure out if it reflects the drought or if the algae growth was so high it used up much of the available phosphorus.

You can help reduce phosphorus pollution by supporting investments in green stormwater infrastructure and stormwater utilities in your neighborhood and reducing your use of synthetic fertilizers.

Dissolved oxygen is important for aquatic life because many underwater organisms need oxygen, just like we do. They get it from the water like we get it from the air. Certain animals, including trout, require more dissolved oxygen than others. Low dissolved oxygen levels are linked to drought conditions and sustained high temperatures and can lead to a reduction in the population sizes of the numerous aquatic species that are reliant on oxygen in the water.

August had some of our worst dissolved oxygen levels, with only 16 sites (39%) reaching the warm water standards for dissolved oxygen. The temperature spikes at the end of July into August seem to have had a significant impact on aquatic life, with reports of fish kills and low flow impacting measurements.

Luckily by September, the dissolved oxygen levels once again rose, with only 4 sites failing to meet the state standards. And in October that number was down to 3. While this is good to see, our aquatic wildlife needs to use the streams in the driest and hottest of times too, and we should work to protect our water against the impacts of drought and climate change. 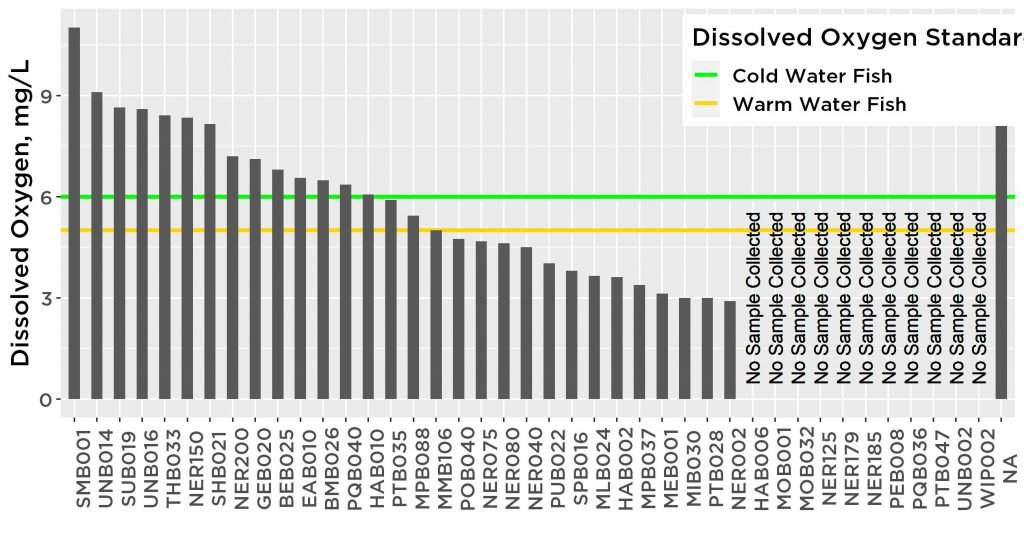 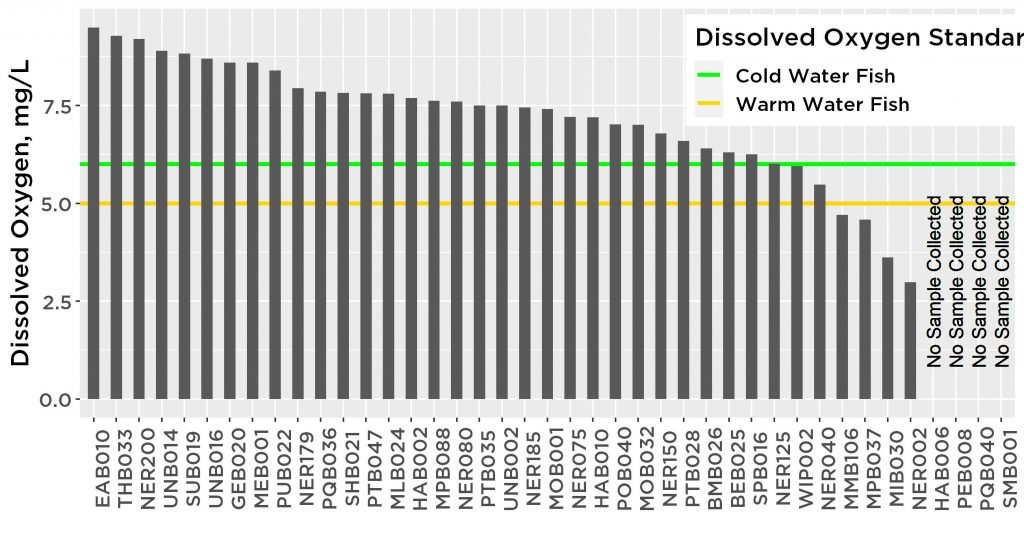 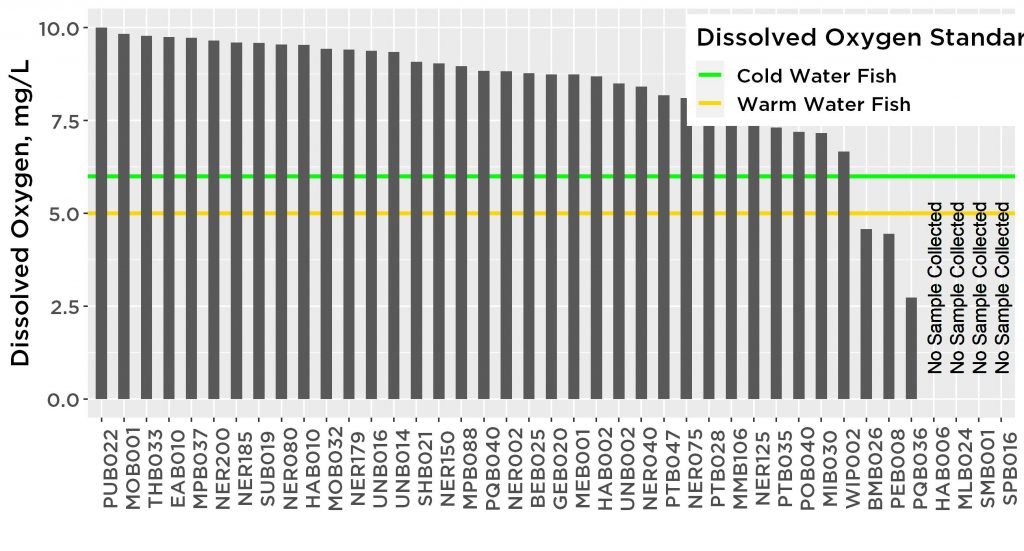