Watershed Association members have been calling in an impressive collection of wildlife reports so far this year and one backed up her hard to believe claim with a grainy photo worthy of the best Sasquatch hunter.

The Canton Citizen did a story not long ago about beavers settling in along Ponkapoag Brook, which may be the first beavers in the Neponset Watershed in at least 20 years and perhaps as long as 200 years. Given that these toothy dam-builders have been well established in the Charles and Taunton River Watersheds for some time, we’ve been wondering why it has taken them so long to move into our neck of the woods. As an aside, research shows that fish generally can get over, under or past beaver dams unlike their man-made counterparts. 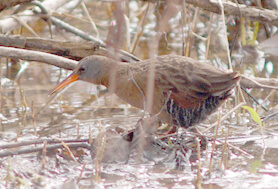 John Linehan, who ought to know his animals as President and CEO of Zoo New England, reports having seen several river otter and mink along route 138 near the wetland areas in the vicinity of the Canton-Stoughton border as well as further north near the Watershed Association office where Route 138 crosses Ponkapoag Brook in Canton. Elisa from Canton also reported and otter along Ponkapoag Brook this spring. We seem to be getting more and more reports of river otters in recent years and it was not so long ago that they were merely unconfirmed rumors. Unfortunately John’s reports were of road-killed specimens, and Elisa’s was also deceased and may have been killed by trapping. John suggests that wildlife-usable culverts be provided under Route 138.

Those who joined Board Member Les Tyrala for his spring bird walk in Fowl Meadow were treated to 29 species of birds including the several notable species including two Virginia rails, a blue-gray gnatcatcher, and a rose-breasted grosbeak. 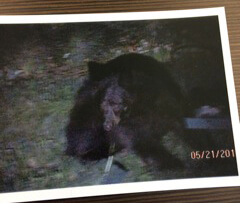 But perhaps the most impressive report, came just a few days ago from Laura in Walpole, whose neighbor not only saw but photographed a four foot tall black bear in her back yard near Traphole Brook on May 21! The bear has not been spotted again, so it appears he has moved along, and bears are known for roaming long distances. When we first heard this from Laura, we frankly couldn’t believe it…seriously bears in Walpole? But then Laura made good with a photo of the furry visitor, or actually a photo of a photo. While the poor image quality gives the picture a “sasquatch-like” feeling, it is very clearly a black bear.

Post a comment below to let us know what you’ve been seeing around your backyard in the Neponset River Watershed. Mountain Lion anyone?