$4.25m for Clean up of Port Norfolk Site 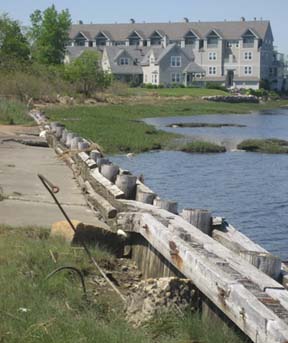 The following article appeared in the Dorchester Reporter on December 11, 2013.

A parcel of land in Port Norfolk will see an influx of $4.25 million in fix-up funding over the next three fiscal years, according to a plan that state officials laid out on Thursday. Civic activists have been pushing the state for decades to clean up the 14-acre Shaffer Paper site.

Mayor-elect Marty Walsh, state Sen. Linda Dorcena Forry, state Rep. Dan Cullinane, City Councillor Frank Baker and officials from the state Department of Conservation and Recreation stood in the shadow of the MBTA bridge, the Neponset River behind them, and announced the commitment.

DCR officials are scheduled to gather public input on their plans and discuss how best to connect the parcel with the Neponset Greenway Trail at the monthly meeting of the Port Norfolk Civic Association on Tuesday, Dec. 17. The meeting will begin at 7 p.m. at the Port Norfolk Yacht Club at 179 Walnut St.

The plans include removing the pilings along the water front, along with the bulkhead and area’s seawall. A firm based in Woburn, GEI Consultants of Woburn, to work on the parcel’s design, according to DCR.

“Port Norfolk is getting its park,” said Valerie Burns, president of the Boston Natural Areas Network. “We are going to see the vision realized.”

The former home to the Shaffer Paper Company, a lumber yard, and a metal fabricating company, the site is located close to the MBTA bridge that crosses the Neponset River. The name of the parcel has been spelled two ways by locals and DCR: Schaffer and Shaffer.

The state agency took the land through eminent domain in 1986, paying $1.9 million and spending $3 million on environmental testing and to take down several buildings on the property. The grounds are considered contaminated with hazardous materials, requiring a clean-up in order for it to be used by the public.

At the Thursday morning press conference, DCR Commissioner Jack Murray said the “day is long past due.”

Mayor-elect Walsh, a Dorchester state representative for 16 years, said he spent most of his tenure asking for the site to be cleaned up. “The neighbors have put up with the site for a long time, illegal dumping, and we had a barge that smashed into here, a runaway barge at one point, a couple of years ago,” Walsh said. “So I’m really happy for the community down here to get this Shaffer paper site cleaned up finally and get a park here.”

Walsh also praised Dan Hunt, an attorney and aide at the Department of Conservation and Recreation who is planning a run for Walsh’s state representative seat. Walsh said Hunt helped push the project along. “We tortured him in our office,” Walsh joked.

Gov. Patrick called Walsh last week to tell him the administration planned to allocate the money for the project.

Mary McCarthy, the head of Port Norfolk Civic Association, noted that she had buttonholed Gov. Patrick at a house party when he was running for reelection and brought up the Shaffer site.

Civic organizations in the area, along with local elected officials, have repeatedly asked the state to decontaminate the site and turn it into a pine grove, a tot lot, and a playground.

Dorcena Forry thanked the neighborhood for pressing for the project. “It’s the work you guys did,” Councillor Baker added.