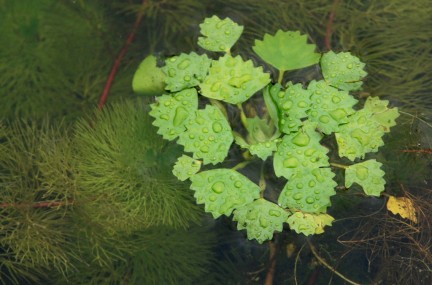 European water chestnut (Trapa natans) is an exotic, invasive aquatic plant that can occupy slow-moving waters and especially ponds and lakes in the Commonwealth.

Did you know that European water chestnut lives in the Neponset River Watershed?

Water chestnut has grown in Ellis Pond in Norwood. The MA Department of Environmental Management initially spotted the species during a routine check in 2002. Then the Town of Norwood (and the Neponset River Watershed Association, in the past), organized volunteers to pull up the exotic, invasive plants. To this day, Norwood continues to organize plant-removal sessions.

If left unchecked, Water chestnut could spread rapidly across Ellis Pond, forming a mat that would make it difficult for wildlife to find food and habit, prevent any paddling or swimming, and eventually causing low oxygen levels in the water, leading to fish kills.

Keep your eye out for this fast-spreading aquatic plant. Inform Executive Director, Ian Cooke if you spot any: cooke@neponset.org, 781-575-0354 x305.

FYI: European water chestnut (Trapa natans) is different than what you might put on your dinner plate (Eleocharis dulcis).