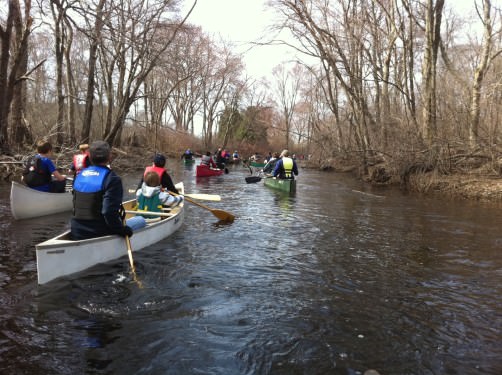 Dam removal would greatly expand fishing opportunities. Boating which is currently blocked by the dams would be safer and considerably more enjoyable, and the safety of those recreating along the banks of the river would be enhanced.

Removing the dams also would change the appearance of the river as seen from the perspective of those recreating along the riverbanks. This, combined with the opportunity to recreate bordering vegetated wetlands that were flooded when the dams were built, creates an opportunity to re-engineer the Neponset River channel to maximize its aesthetic value for those enjoying the shoreline.

The restoration of fish populations discussed elsewhere would lead to a substantial increase in recreational fishing opportunities on the Neponset River. This increased fishing resource has the potential to translate into a substantial economic activity as well. Recreational fishing adds more than $1 billion to the Massachusetts economy each year, and shad fishing is a major tourism industry on other Massachusetts rivers like the Connecticut .

In addition, remediation of PCB-contaminated sediments would be expected, over time, to reduce contaminant levels in resident fish species and lead to the eventual lifting of fish consumption bans which currently apply to fish caught in the Neponset River in Norwood, Walpole, Westwood, Dedham, Canton, Hyde Park, Mattapan and Dorchester.

The Baker and T&H Dams each creates a pond which can currently be navigated by canoes, kayaks and other small boats. However, the ponds are too small to serve as significant boating destinations in their own right. Under existing conditions, boating through the Lower Neponset (i.e., from Readville to the ocean) is difficult because boaters must stop and carry their boats and gear for approximately ¼-mile around each of the dams. The portage route at the T&H Dam is currently closed due to the actions of the abutting private property owner. The portage route at the Baker Dam requires carrying boats across an active trolley line.

An additional component of an integrated fish passage/PCB-cleanup project would be reconfiguration of the stream channel to enhance the river’s value for boating and habitat purposes. The dams and their ponds would be replaced with a series of calm pools, smooth moving water, and riffles or small rapids. The primary hazard to novice boaters—the dams—would be eliminated. The drudgery of carrying boats around each dam would be replaced with a continuous “water-trail” from Walpole , through the Blue Hills, to the sea.

Under existing conditions, significant recreation occurs along the banks of the river by those walking, jogging or cycling along the Neponset Greenway Trail. Removal of the Baker and T&H dams would not adversely affect such recreational activities. It would, however, result in the cleanup of PCB-contaminated sediments below the mean high water line, which would make accessing the water’s edge, picnicking and similar activities safer.