The Watershed Association and the Mass. Department of Conservation & Recreation - South Region collaborated on a five-year project to reduce exotic, invasive Purple loosestrife in the Fowl Meadow and Blue Hills Reservation, to improve native biodiversity and wildlife habitat.

During the summer of 2008, the Neponset River Watershed Association began a five-year collaborative wetland restoration project based in the Fowl Meadow wetlands of the Neponset River Reservation and at Brookwood Farm (Milton and Canton), within the Blue Hills Reservation. The project finished up during the fall of 2012. 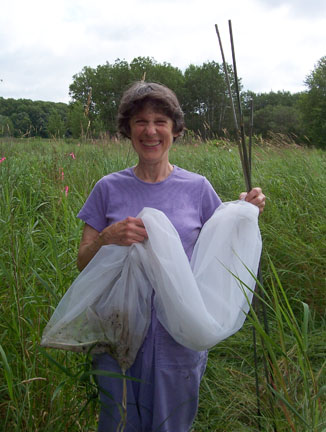 Beetle Rancher Mary, after she has released the biocontrol beetles that she raised, into Fowl Meadow.

Our project partner was the Mass. Dept. of Conservation and Recreation – South Region, and our initial project advisor was the Wetlands Restoration Program of the MA Office of Coastal Zone Management (now, the MA Division of Ecological Restoration).

Supported by funding from the Wildlife Habitat Incentives Program of the Natural Resources Conservation Service, the Corporate Wetlands Restoration Partnership, the Department of Conservation and Recreation Partnerships Matching Funds program, the NLT Foundation, the William P. Wharton Trust, and The Norcross Wildlife Foundation, Inc., and with the assistance of a strong corps of volunteers, we applied a biological control agent to reduce the exotic, invasive Purple loosestrife infestation in targeted wetlands.

This was the first wetland restoration project under our Pilot Wetland Restoration Program.

We decided to focus on reducing infestations of Purple loosestrife (Lythrum salicaria) because of the rapidity with which the species spreads and simultaneously degrades wildlife habitat.

Once Purple loosestrife establishes a foothold in a local wetland, it can spread until it dominates and essentially crowds out native wetland vegetation relied on by native wildlife.

A wetland dominated by Purple loosestrife does not provide an equivalent array of ecological benefits compared to a wetland of native wetland plants. This issue is of particular concern at Fowl Meadow, where there are known state-listed endangered, threatened, and special concern species.

The two Galerucella beetle species (G. pusilla and G. calmariensis) that we used feed primarily on Purple loosestrife plants, and feed very little if at all on other plant species. Their appropriateness for use as biological control beetles here in the USA has been tested since 1986. Since 2000, these two species of beetle have been incorporated into a Purple loosestrife biocontrol program by the Wetland Restoration Program of the MA Office of Coastal Zone Management (now, the MA Division of Ecological Restoration). These beetles are used throughout New England and the USA for Purple loosestrife biocontrol projects. 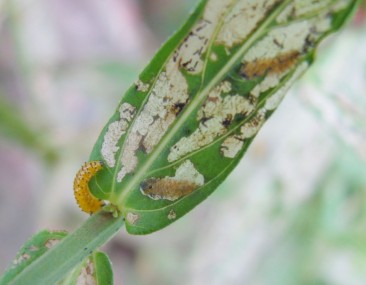 Larvae of Galerucella beetles feed on the leaf of a Purple loosestrife plant. Photo by Paul Lauenstein.

Through five consecutive summers of beetle releases, we established a self-sustaining population of Galerucella beetles in the project treatment areas. These beetles will continue to control Purple loosestrife in the years to come.

The beetle populations at our treatment sites will rise and fall, depending on the availability of Purple loosestrife, the weather, the beetles’ reproduction and mortality rates, the influx of Galerucella from other areas, the migration away from the sites, and the presence of predators.

During the first year of this project, we purchased all of the biocontrol beetles. During the remainder years, volunteer “Beetle Ranchers” raised the majority of the beetles.

By reviewing the data from site-monitoring sessions implemented both prior to and after each year’s beetle releases, we assessed whether this biocontrol method is an effective means for controlling and reducing Purple loosestrife populations at our treatment sites.

Our project strengthened the organizational capacity of the project partners to implement biocontrol projects, in general. It also educated the public and land managers about this tool to control an exotic, invasive species. Likewise, the project helped to develop a self-sustaining population of Purple loosestrife biocontrol agents within and around the northern Fowl Meadow and Brookwood Farm, which will continually work to control the population and spread of Purple loosestrife, thereby making for a landscape better able to support diverse native species. In addition, over 300 adults and children participated in this project as volunteers engaged in diverse activities – from raising and releasing beetles, to monitoring study sites, to sewing nets.