The health of the Lower Neponset River is complicated by the contamination of its sediments with PCBs (polychlorinated biphenyls), in the area downstream of Mother Brook, in Hyde Park, Mattapan, Dorchester and Milton. 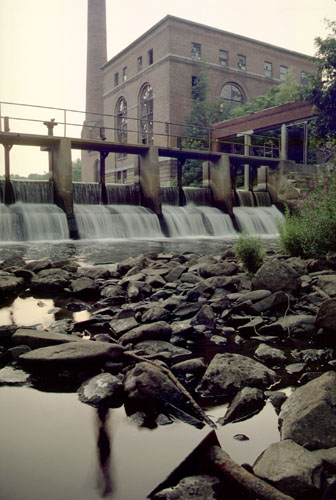 Walter Baker Dam, at Lower Mills, on the Neponset River presents an obstacle to fish migration. Unfortunately, PCB-contaminated sediments also have accumulated behind this dam and behind the upstream Tileston & Hollingsworth Dam.

The sediments of most urban rivers like the Neponset can be presumed to contain some level of contaminants as a legacy of past pollution discharges.

However, the Lower Neponset River contains river-bottom sediments that are severely contaminated with PCBs (polychlorinated biphenyls) in the area downstream of Mother Brook (Hyde Park, Mattapan, Dorchester and Milton).

PCBs in the river would be cleaned up in conjunction with any dam removal project. In the absence of dam removal, the state is not required to implement any cleanup activities and has indicated no interest in pursuing a voluntary cleanup. Combining river restoration with PCB cleanup will help ensure that PCB cleanup is implemented relatively quickly and in a manner sensitive to river aesthetics, recreational uses and habitat considerations.

State law requires landowners to cleanup hazardous waste in “soils” on their property. However, there is no comparable requirement to cleanup underwater sediments. This is because sediments move around, making it difficult to determine the source of the contaminants (and therefore cleanup responsibility) once they enter a river system.

The US Geological Survey has been evaluating the extent, severity and potential sources of PCB concentrations in sediments of the Neponset River. Some of these results have been published and some are still pending publication. The USGS has collected “surface grab” samples that reflect pollutants in the first few inches of sediment, as well as “core” samples that reflect concentrations in the first 36 inches of sediment. Samples were also collected from the water.

The concentration of most pollutants in sediments of the Neponset River is similar to, or lower than, the same pollutants in other urban rivers. However, PCB concentrations are much higher than “normal” urban river background levels. In fact, PCB concentrations in Neponset River sediments are up to 120 times higher than the state reporting standard for soils and are generally two to 12 times higher than the level at which a property owner would be required to immediately put up a fence around similarly contaminated soils.

The PCBs in the river are not safely contained at the bottom of the river or behind the dams. Rather, they are continually being stirred up during storm events and flushed down into the Neponset Estuary and Boston Harbor. For example, during the spring of 2007, an estimated 200 to 300 lbs of PCBs were flushed into the harbor from behind the Baker Dam. Even in the absence of storms, the PCBs are constantly diffusing into the river water at low levels.

During the same 1960s-era flood control project that involved building the Baker and T&H Dams, the state dredged the river and used the dredged sediments to fill-in riparian wetlands in a number of areas. It is therefore possible that these filled-in riverbank areas may have high levels of PCBs. These bank areas would be considered soils (rather than sediments) under the state hazardous waste law, and the landowners (primarily the state) would be required to implement cleanup actions.

In December 2007, the Mass. Department of Environmental Protection was scheduled to collect soil samples for PCBs in areas where dredge spoils are believed to have been placed on the banks of the river.

The PCBs in the river would have to be cleaned up at the same time that any dam removal project is implemented. In the absence of a dam removal project, the state (which owns most of the river-bottom) currently has no plans to do anything to clean-up the PCBs, and the state would be under no obligation to undertake a cleanup.

There is an ongoing effort to identify the original source of PCBs in the river. If that source is associated with a property that also has PCB-contaminated soils, the owner of the property potentially could be required to cleanup the river. However, there are more than 70 known PCB discharge sites in the Neponset River Watershed, and experts agree that it is unlikely that one or two property owners would be held liable for the cleanup.

Even if a private party were required to cleanup PCBs in the river, it would likely involve decades of legal wrangling, and the private party would be under no obligation to consider aesthetics, recreational uses or habitat considerations in designing their cleanup plan.

Where hazardous waste cleanups have been implemented in area waterways in the past, they have been designed using the least expensive method adequate to eliminate public health risks. In such situations, sediments are generally excavated and then the river and its banks are filled-in or covered-over with angular stone (rip-rap) or interlocking concrete pavers. After remediation, these areas are generally unattractive, devoid of habitat value and undesirable as destinations for boating or riverside recreation.

Aside from its other benefits, the Watershed Association believes that a comprehensive restoration program for the Lower Neponset River that involves dam removal, habitat restoration, recreational enhancements and PCB cleanup is the only way that PCB cleanup will be accomplished in the near-term and in a manner sensitive to aesthetic, recreational and habitat concerns.