Before we can restore fish passage past the Baker and the Tileston & Hollingsworth Dams, the PCB-contaminated sediments that have accumulated behind each dam must be cleaned up. 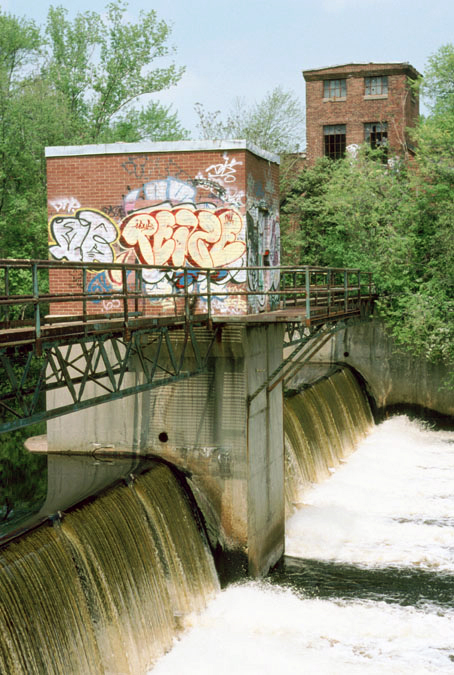 PCB-contaminated sediment has accumulated behind both the Baker and the Tileston & Hollingsworth Dams on the Neponset River. The “T&H Dam” is pictured here in May 2004. Photo by Tom Palmer.

However, before anything can be done about migratory fish, tons of toxic PCB-contaminated sediments lodged up against the dams must be cleaned up. This will be the single most expensive part of the River’s restoration. It is critical to identify the private parties who are responsible for paying at least a large portion of the cleanup costs. Under state law, the current owners of land from which the PCBs originated – the so-called “potentially responsible parties”– are liable for the cleanup costs. However, because many industrial companies located on the Neponset River and its tributaries used PCBs at some time in the past, it isn’t easy to identify those responsible or determine how cleanup costs should be apportioned among them.

The U.S. Geological Survey (USGS) has done considerable testing of Neponset River sediments and concluded in a yet to be published report that much of the PCBs behind the dams originated from Mother Brook in Hyde Park, Boston.

A privately financed cleanup of Mother Brook is almost complete, thanks to the excellent work and sense of corporate responsibility exercised by the Thomas & Betts Company, which owns the former LE Mason industrial site. In the course of the cleanup, another “potentially responsible party” for the PCBs in the Mother Brook cleanup was identified: the Albertson Supermarket chain, which owns much of the former Allis Chalmers industrial site in Hyde Park . However, neither of these companies has taken responsibility for PCBs in the Neponset River , even though their PCB cleanup extends to within 50 feet of where Mother Brook flows into the Neponset River.

Last fall, NepRWA received a Technical Assistance (TAG) Grant from MassDEP to help Hyde Park citizens learn more about the work done by Thomas & Betts (T&B) to clean up PCBs originating from the LE Mason site that had migrated down Mother Brook (a tributary to the Neponset River). With that grant, NepRWA hired Frank Riccardi of Weston & Sampson, a “licensed site professional” (LSP) to take a look first at whether Thomas & Betts followed the law in concluding that PCBs from LE Mason did not migrate into the Neponset River, and second whether T&B should now be made to do additional work to determine the “extent of contamination” in light of the USGS draft findings. Weston & Sampson presented their final Report to NepRWA on June 10, 2009. The Report concluded:

In general, response actions conducted by Thomas & Betts to date have been approved by DEP and EPA and conducted in accordance with the appropriate standard of professional care for the industry.

Read the LE Mason Report or a summary about possible migration of PCBs to the Neponset River.

MassDEP has received a copy of this Report, but they’ve told NepRWA they must wait until the USGS Report is finalized before determining whether to ask Thomas & Betts to do additional work to determine the extent of the PCB contamination for which they’re responsible. Hopefully, the final USGS Report will be made available in the next few months.

The Watershed Associationy applied for a second TAG grant from MassDEP to look into another possible Neponset River PCB source on Mother Brook in Hyde Park – the former Allis Chalmers site, now owned by Shaw’s Supermarket.