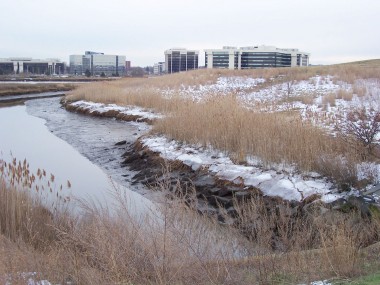 The Neponset River Reservation runs alongside the Neponset Estuary – from the river’s mouth between Squantum Point in Quincy and the colorful gas tank in Dorchester, and upstream along the freshwater section of the river, to the Fowl Meadow (view a map).

From tidal marshes and creeks, to freshwater river surrounded by buildings, roads, woods, trails and marshland, the Reservation is a diverse natural area inhabited and visited by a plethora of species, plant and animal, and with a lengthy historical and cultural past.

As described by the MA Department of Conservation and Recreation (source):

The Neponset River…remains a natural estuary with extensive marshlands at its mouth and significant freshwater wetlands along much of its upstream length. It provides an unusually rich and diverse habitat for both plants and animals including a number of threatened and endangered species. The estuarine portion of the Neponset River upstream of Granite Avenue is characterized by extensive tidal marshes. Granite bound for Boston from Quincy was transferred by early railroad to boats at a pier on the Milton Shore. This segment of the river offers interesting canoeing and nature study opportunities.

In the late 1880’s, inspired by the founders of the Metropolitan Park System, Charles Eliot and Sylvester Baxter, the Metropolitan Park Commission acquired the Neponset River salt marshes – the first salt marshes in the Commonwealth to be publicly owned. Over the past 100 years the Metropolitan District Commission (MDC) has actively worked to acquire approximately 750 acres along the Neponset River. These acquisitions include formerly used lands, such as the Neponset Drive-In and Hallett Street land fill in 1973 and Shaffer Paper the former Sterns Lumber Yard, in 1986, all to be rehabilitated as parkland and an abandoned rail right of way in 1990.

The Lower Neponset River Reservation Master Plan was prepared in 1966 with community guidance. The plan builds up the principles set forth by Eliot and Baxter of wise land stewardship, restoring damaged natural areas and opening portions of the outdoors for public use and enjoyment. The Plan made recommendations for new open space and parkland development with three of its five recommendations being implemented.

Pope John Paul II Park, a new 66 acre park, has been constructed on the site of the former Neponset Drive-In and Hallett Street land fill and opened to the public in 2001. At Squantum Point in Quincy , phase one of Squantum Point Park, 25 acres of a 50 acre former U.S. Navy Airfield, was developed as waterfront parkland Point Park with assistance from The National Grid Co. and dedicated in the spring of 2001. The completion of 2.4 miles of the Lower Neponset River Trail in 2003 will create opportunities for people to rediscover the Neponset River and the Reservation and to traverse a rich variety of historical and ecological contexts.

The site of the former T-Construction Company and Schlager Auto Body were acquired by the Commission in 1998 to be rehabilitated as parkland. The Commission hopes to acquire a parcel (The JSax property) adjacent to these two parcels in 2003. These three parcels were not included in the Master Plan of 1996. Their rehabilitation as a new 7 acre waterfront park called Neponset II will provide an important missing link between the recently developed parkland at Pope John Paul II Park and the MDC Neponset Marshes just west of Granite Avenue.

The Reservation also offers other recreational and educational opportunities at Mohnihan Playground and the Martini Shell in Hyde Park, Ryan Playground in Mattapan and Ventura Street Playground in Dorchester. Kennedy Park in Mattapan is home to a community garden and the City Natives Nursery.

In 1995, the Neponset River Estuary was designated an Area of Critical Environmental Concern (ACEC). As DCR notes,

“The Neponset River Estuary ACEC is approximately 1,300 acres in size and is located in Boston (435 acres), Milton (355 acres) and Quincy (470 acres). The ACEC boundary is based upon the Wetlands Protection Act Regulations (wetlands resource areas and a 100-foot buffer) plus adjacent public open space and historic districts. The ACEC begins at the Lower Mills Dam in Milton and Dorchester, which separates the coastal estuary from the inland fresh water portion of the Neponset, and extends to the mouth of the river at Commercial Point in Boston and Squantum Point in Quincy.” Learn more.

The ACEC, besides containing the Neponset River, also includes Gulliver Creek in Milton and Sagamore Creek in Quincy.