Neither the Baker Dam nor the Tileston & Hollingsworth Dam is used to generate hydropower, nor are they likely to be used to do so in the future. The characteristics of these sites are not conducive to generating power in this day and age. 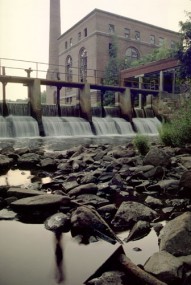 Although the Baker Dam neither holds back flood-waters nor creates energy, it does hinder both fish migration and boating.

There have been no meaningful industrial uses of the Baker Dam or its impoundment since it was constructed in 1964. The Baker Chocolate Company ceased its operations at Lower Mills in 1965.

By contrast, the impoundment created by the T&H Dam was used by the Bay State Paper Company as a source for industrial process water until the late 1990s. However, Bay State Paper has closed its doors for good and now a shopping center stands at this site.

It seems extremely unlikely that there might be any future industrial uses associated with either of these dams.

The cost of hydropower generation at either of these dams is even more prohibitive when one considers the substantial cost not only of retrofitting the dams, but of operating and maintaining these aging structures.

Finally, implementation of hydropower facilities at either of these locations would require issuance of a permit from the Federal Energy Regulatory Commission or “FERC.” FERC would normally require provision of fish passage facilities as a precondition for issuing a permit, making the prospect of hydropower generation that much more economically infeasible.