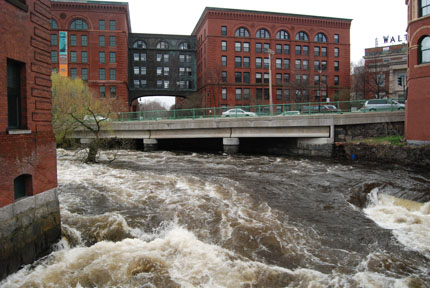 Just below Baker Dam at Lower Mills, is an area of the Neponset River in which smelt lay eggs, each spring.

Since the 1970s, an extraordinary improvement in the water quality of the Neponset River has occurred.

Untreated industrial wastewater discharges and sewer overflows are gone, although their toxic contaminants remain on the river-bottom. Public lands along the waterfront are being opened up for recreational use, and more people are enjoying the river once again. Where private property owners once turned their back on the Neponset, a spate of recent redevelopment projects is helping to reorient neighborhoods back toward the river.

We aim to restore historic spawning runs of herring and shad for 17 miles up the Neponset by modifying two obsolete state dams – the Baker Dam in Lower Mills, and the Tileston & Hollingsworth (“T&H”) Dam that spans the river between Boston and Milton. We also are pushing for the removal and treatment of contaminated river-bottom sediments. Polychlorinated biphenyls (“PCBs”) occur in these sediments, leftover from past industrial use and dumping.

View a map of the project area.

Besides restoring fish passage and water flow along the river, the project would reduce the risk of flooding, and restore the river channel to a more natural shape and flow that will enhance recreation, wildlife and aesthetics. 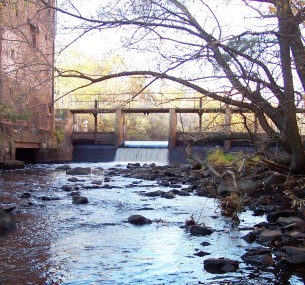 Looking upstream from Adams St. at the Baker Dam on the Neponset River, at Lower Mills.

The Tileston and Hollingsworth (“T&H”) Dam is located not far upstream, between Milton (off Truman Parkway) and Hyde Park (near River Street) and is not visible from any public streets.

Both dams are owned by the state and were built in the mid-1960s as part of a project that channelized the Lower Neponset, filled its floodplain, and removed three other dams that were severely damaged during the 1955 hurricane and flood.

Historically, there were a series of mill dams built in the vicinity of the Baker Dam and the T&H Dam for industrial purposes, dating as far back as 1634.

The Baker and T&H Dams have no fish passage facilities and block a number of migratory fish species—most notably Blueback herring and American shad—from reaching 17 miles of historic spawning grounds on the Neponset River and its tributaries upstream.

If the fish could bypass the dams, fish “runs” would be restored in Walpole, Norwood, Westwood, Dedham, Hyde Park, Mattapan, Dorchester, Quincy, Milton, and Canton.

In 1996, the Massachusetts Executive Office of Environmental Affairs entered a cooperative agreement with the US Army Corps of Engineers to evaluate options for restoring fish runs on the Neponset River. The EOEA designated the Riverways Program within the Mass Department of Fish and Game as the lead agency to coordinate and administer studies of the lower Neponset.

At a January 2008 Public Meeting in Dorchester, a USGS scientist reported that:

View a map of the PCB-levels found in this segment of the Neponset river.

The Riverways Program also financed two studies implemented by the private consulting firm of Milone & MacBroom to identify the costs and benefits of all feasible options for river restoration, including PCB cleanup.

The firm looked at 28 alternatives, including “do nothing,” fish ladders, removal or alteration of the dams, installation of rock ramps and bypass channels, and channel relocation in combination with various sediment management techniques.

Most of the fish passage alternatives were found to be technically infeasible. Feasible PCB cleanup alternatives included dredging the contaminated sediments, shipping them out of state, and permanently “capping” the sediments behind the two dams.

A broadly based Neponset River Restoration Technical Advisory Committee (composed of representatives from three federal agencies as well as numerous state and local government agencies and private organizations) recommended as their preferred alternative the removal of Baker and T&H Dams and the dredging and removal of contaminated sediments. Many Massachusetts environmental and watershed groups (including MassAudubon, Sierra Club, Conservation Law Foundation and the Charles River Watershed Association) also support full dam removal.

Before a “preferred” river restoration option is selected by the state for permitting, community input is being sought on the best way to proceed. The Neponset River Watershed Association, along with the Boston Environment Department, the Milton Conservation Commission, the Mass Department of Conservation & Recreation, the Mass Department of Fish & Game, and the Lower Mills Merchants Association have convened a Citizens Advisory Committee or “CAC” to evaluate options for restoring the Neponset River.

View photo’s from the signing of a set of recommendations for the restoration of the Neponset River, by the CAC.

There also will be plenty of opportunities for public comment once the project is proposed for review under the Massachusetts Environmental Protection Act (MEPA), and the many required permits are applied for.

A few years ago, the Watershed Association called together a Citizens Advisory Committee on the Lower Neponset (CAC), made up of neighborhood and civic associations as well as environmental groups, condo associations, yacht clubs and the like. The CAC reached a unanimous agreement in 2009, which recommended cleanup of the toxic sediments behind the two dams, removal of the more upstream Tileston & Hollingsworth (T&H) Dam in Hyde Park and Milton , and partial removal of the Baker Dam in Lower Mills along with construction of a nature-like fishway suitable for shad and herring.

The CAC has been called together for annual updates on the project, ever since.

In 2011, the CAC learned that, concerning the sediments contaminated with toxic PCBs behind the dams, both of the major upstream sources of PCBs have been, or soon will be, cleaned up. Furthermore, the U.S. Geological Survey has published a report on the Neponset that claims to have identified the precise locations from which came most of these PCBs behind the dams. If this can be proved, the current owners of these sites will be responsible for cleaning up the contamination. Regarding the Baker Dam, a consultant has drafted a Preliminary Design plan for the nature-like fishway. This is an essential first step to getting federal funding for the project. Finally, two state agencies (MA Department of Fish & Game and MA Department of Conservation & Recreation) have finally agreed upon what needs to be done to confirm that removal of the T&H Dam will not cause flooding. Although progress has been slow, we now have full local support for cleanup of the River and restoration of its fish runs, and we have made significant progress on technical issues as well.