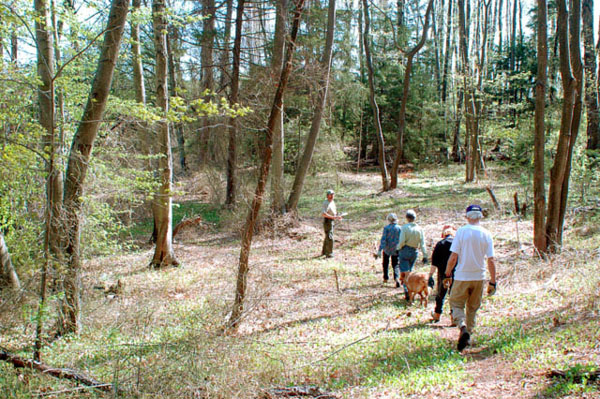 Forbes Woods in early May

Forbes Woods is the 35+ acres of mature woods made up of six separate parcels that sit behind the marsh on the Milton side of the Estuary. It is visible from the expressway as you drive south past the Granite Ave exit. The woods are home to two state champion trees: the largest black cherry (Prunus serotina) and the largest black oak (Quercus velutina) in Massachusetts. They provide crucial upland wildlife habitat bordering the estuary in an area where more than two hundred species of birds are found. Additionally, the woods provide a beautiful wild backdrop to the estuary, defining the natural character of the area as seen from Milton Landing, Cedar Grove Cemetery, and the Neponset Greenway bikepath.

In September of 2001, the largest single parcel in the woods (some 25 acres owned by the Forbes Family) went up for sale and was in danger of immediate destruction. Development proposals ranged from a dozen large homes to a complex of up to 80 units.

In response to the threat, the Neponset River Watershed Association helped bring together the “Friends of Forbes Woods,” a diverse coalition of groups devoted to preserving the woods forever. The “Friends” included the Trust for Public Land, who negotiated a purchase agreement with the Forbes family, as well as the Milton Garden Club, the Cedar Grove Civic Association, the Milton Conservation Commission and the Milton Board of Selectmen.

On July 17, 2002, neighbors, advocacy groups and state agency staff gathered at Forbes Woods to celebrate the final acquisition of the DCR’s newest piece of conservation land. The Neponset’s legislative delegation, led by Milton Representative Walter Timility and Milton Senator Brian Joyce (with the blessing of Governor Swift), secured the 2.7 million dollars needed to ultimately purchase the property. The whole effort has been an amazing example of how effective it is to combine talents to bring together a community in order to reach a goal. The project would never have been successful without the unique contribution of each member of the Friends.