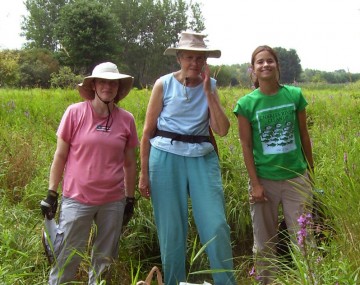 Species present in a region for thousands of years, plus, are considered “native”. Over this period of time, other native species have learned to rely on them for food, shelter, or other needs.

It’s possible to learn which species have lived in an area for thousands of years by taking core samples of the soil. Within those samples, one identifies the species of plant remnants (i.e., pollen, plant segments, etc.) present.

“Exotic” species are those that arrived more recently in an area, having traveled from elsewhere in the continent or even from another part of the world.

A species is considered “invasive” if it is very successful at spreading via reproducing and outcompeting other species. Both native and exotic species can be invasive. However, it is the exotic, invasive species that are of most concern.

Only a very small proportion of exotic species becomes invasive. People attempt to control and reduce these species before they spread further. Examples include Garlic mustard, Asian carp, Japanese knotweed, and Zebra mussels.

Here in New England, most of the “exotic, invasive” species of concern have been transported to North America since the arrival of the European colonists. Some of these species were transported accidentally, while others were brought on purpose.

Seeds of an exotic, invasive plant can travel between countries or regions on the clothes of travelers, in products shipped, on vehicles, or in ship ballast water. Some people purposefully transport their favorite plants and animals between countries and even distribute these or propagate and sell them. Later, these species reproduce and spread on their own.

Exotic, invasive species are so successful because the growth of their populations here is not controlled by the predators and competitors with which they evolved. Some exotic, invasive species also have a growth advantage over native plants. For example, some sprout leaves earlier in the spring than native species, and even lose their leaves later in the fall. As a result, the exotic species have additional time to grow, thereby accessing more nutrients, light and water, and gaining more exposure to pollinators and seed-dispersing wildlife.

When walking, driving, biking or boating through areas infested with exotic, invasive species, clean your clothing (including shoes) and equipment before entering other areas, to avoid spreading the seeds and plant parts – and thereby producing more plants.

Strive to plant native plants in your yard, and encourage your neighbors, friends and family to do the same. These plants will provide habitat and food for native species.

Remove exotic, invasive plants from your yard and local green spaces – and dispose of them properly- to prevent these plants from spreading seed or re-rooting elsewhere.

Projects around the region can use your help. Contact your local conservation group or land trust to offer your help.