The condition of aquatic resources, and the habitat they provide for species in the Neponset River Watershed, is affected by a variety of factors and activities in the landscape.

Pollutants can enter the water from the surrounding landscape, from precipitation, from groundwater, or from upstream in the water, and can directly kill wildlife or cause them hardship. High nutrient levels from untreated sewage can spark dense aquatic plant growth in waterways. 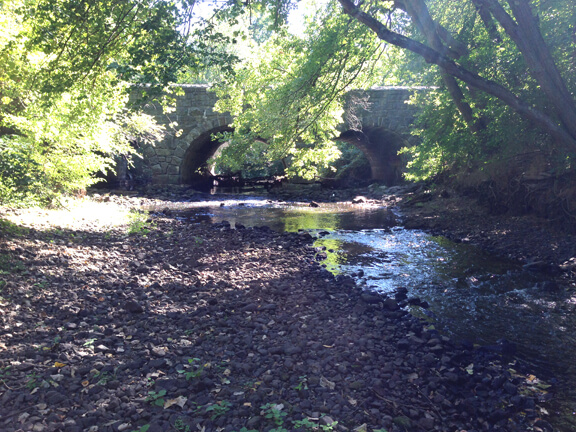 Removal of riparian habitats and buffers reduces the ability of a waterway to maintain cooled water, to provide food and wildlife habitat, and to avoid pollution from surface water and erosion.

Water joining the waterbody can cause bank erosion and siltation, which can kill fish eggs and block fish passage.

Disturbance of vegetation and soil at the water’s edge

Bank disturbance can cause siltation in the waterbody, warming of the water via removal of bank vegetation that shaded the water, and water pollution.

Acidic rain and snow occurs as a result of pollutants that have been released into the air via burning coal and smelting metal sulfide ores to obtain zinc, nickel and copper, as well as via volcanic eruptions, organic decay, and ocean spray.

An acidic rainstorm or snowstorm can cause temporary high acidity in waterbodies and also cause aluminum to leach from the surrounding landscape, into the water.

Aluminum is toxic to aquatic wildlife. The more acidic a waterbody becomes, the fewer species can live in those waters. However, it is also true that different aquatic species can tolerate different pH (i.e., Frogs withstand more acidity than can clams. If water becomes too acidic, fish eggs won’t hatch, and some fish can die.).

Some aquatic species cannot tolerate the warmer, more polluted water, with less available oxygen, nor can they tolerate not being able to migrate. Low water levels, inadequate culverts and fish ladders, and accumulation of sediments can also obstruct waterways.