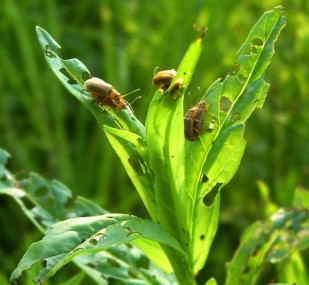 In 2011, we raised Purple loosestrife biological control (“biocontrol”) beetles (Galerucella calmariensis and G. pusilla) to treat Purple loosestrife in the northern Fowl Meadow wetlands and in nearby Brookwood Farm, in quantities guided by recommendations from project advisor the Massachusetts Department of Ecological Restoration (DER). Our goal has been to produce and release approximately 10,000 beetles per acre, or 200,000 beetles, per year. We followed propagation, release and monitoring protocols of the University of Minnesota Extension Service and the University of Connecticut Integrated Pest Management Program , in addition to guidance from DER. These cultivated beetles strengthen local populations of biocontrol beetles that descended from prior years’ releases and migrations. This combined Galerucella force will reduce Purple loosestrife over the long-term at our treatment sites.

In 2011, we potted 514 Purple loosestrife rootballs, harvested from a Canton site for which we gained permission from the Canton Conservation Agent. We inoculated 478 of the resulting grown plants with purchased seed beetles. The remaining 36 potted rootballs were not inoculated with laboratory-grown beetles for one of several reasons (listed in order of most to least common occurrence): 1) The plant already had attracted sufficient “wild” biocontrol beetles prior to arrival of the lab-grown beetles (approx. 18 pots), 2) The rootball did not produce a strong enough plant (approx. 10 pots), 3) The rootball produced the wrong species of plant (approx. 5 pots), or 4) The rootball produced no plant at all (approx. 3 pots). Note that as time passed, the pots that had appeared barren usually produced a Purple loosestrife plant or two. Also, potted Purple loosestrife plants that were not netted often attracted Galerucella beetles, which fed and laid eggs on the plant.

In 2011, we ordered 8,838 Galerucella calmariensis and Galerucella pusilla beetles from the New Jersey Dept. of Agriculture Phillip Alampi Beneficial Insect Laboratory, to act as seed beetles for our beetle nurseries. Note that the 8,838 beetles included extra beetles to replace those lost during shipment, last year (in 2010, one of the shipping boxes was crushed during transport, releasing some beetles).

Because it is not feasible to count the new beetles as they emerge [e.g., for a variety of reasons, such as: 1) The new adults emerge from pupation at different times, 2) Pupating Galerucella are hidden within the soil, and 3) Larvae are hidden within buds], we use very conservative values from the literature to estimate the number of beetles produced. The UCONN Integrated Pest Management Program estimates that 10-15 seed Galerucella beetles placed on a netted, potted Purple loosestrife plant will yield at least 1,250 new adults, and the University of Minnesota Extension Service estimates that 10 beetles applied to such a plant yield 1,000-2,000 new adults. To ensure that our estimates of beetle production are very conservative, we have assumed that 10 to 15 seed beetles per plant will produce at least 500 new adults and not more than 1,250. Using these figures, we estimate that our final beetle production for 2011 was at least 254,500 beetles, and potentially up to 636,250 beetles:

In 2011, all three treatment sites (Brookwood Farm, Milton-Fowl Meadow, and Hyde Park-Fowl Meadow) exhibited a decline of the following, compared to 2008:

In 2011, both the Brookwood Farm and Milton-Fowl Meadow biocontrol sites exhibited a decline in the following, compared to 2008 (whereas the Hyde Park-Fowl Meadow site exhibited an increase):

Note that variability in results over time is to be expected with any biological control. Were we to have access to Purple loosestrife monitoring data gathered from our treatment sites prior to the start of our project, it would provide greater context for our observed fluctuations of the Purple loosestrife populations. However, we do not have such information. Also, had we installed more study plots across a greater swathe of each of our treatment sites, at the start of the project, we would be able to view our observed trends in Purple loosestrife growth and Galerucella effects in finer resolution. However, significantly more labor would have been required for additional monitoring.
Potential factors behind observed results include:

Weather differences between project years. Varied weather affects the growing conditions for both Purple loosestrife and Galerucella, potentially resulting in differences in mortality, survival and reproduction rates for both the plants and their biocontrol agents. Purple loosestrife can start to grow, leaf-out, bloom, and die-back earlier or later in the year, depending on the weather, affecting food availability for Galerucella, and thereby potentially Galerucella survival, reproduction, migration and mortality rates. Flooding from spring rains may increase mortality of hibernating Galerucella. Furthermore, earlier-than-usual hot weather during the early spring might speed-up growth and flowering of Purple loosestrife and even the emergence of Galerucella.

Some of the Purple loosestrife rootballs that were used in beetle ranching and then left in the treatment sites flowered during the following growing season. This flowering could have affected the overall view of the treatment sites (e.g., subjective judgement on amount of flowering, overall), but not of the study plots themselves, as we did not leave beetle nurseries in the study plots. We leave rootballs in the field for several reasons: 1) To provide any Galerucella that are pupating in the potted soil the opportunity to emerge the following growing season, then to feed on Purple loosestrife, and to reproduce, and 2) It would be significantly more time- and labor-intensive, as well as expensive, to incinerate all approximately 500 rootballs, each project year.

We implemented site- monitoring on different dates, in different weather, and at different times of day, each year. These variations may have affected our monitoring data; the plants, Galerucella and other wildlife may have been at different phases of life or involved in different activities (and therefore either visible or out of sight, because of it) during monitoring.

Project Year 4 (2011) of our Project began with planning in winter 2010, and hit the ground running in early 2011 when we began to recruit Beetle Ranching Volunteers from Watershed Association supporters, conservation colleagues, and the general public through mass e-mails, press releases to local and regional newspapers, and on-line postings. Ultimately, we recruited 42 “Beetle Rancher Volunteers” in addition to general project volunteers for harvesting rootballs, site monitoring, and net repair. Each “volunteer” was comprised of either an individual, a family, scout troop, elementary, middle or high school class, or organization. Thus, considerably more than 42 individuals (e.g., approximately 180 total individuals) participated in the Purple loosestrife biocontrol project. Participants hailed from Metro Boston communities within and beyond the Neponset River Watershed.

In early spring, we purchased project equipment – kiddie pools, potting soil and net repair supplies. Then, we held volunteer training sessions in March. In April, volunteers harvested Purple loosestrife rootballs at a local wetland, planted these rootballs in pots, and brought them home to maintain.

In mid-spring, some Beetle Ranchers and general project volunteers helped to repair beetle nursery nets used during the previous field season. Volunteers also sewed new nets for use in 2011.

In late spring, our two shipments of seed beetles arrived in early June. Volunteers gathered at our office on the day of each shipment to divide the beetles into small containers. On those same days, and in the morning immediately following, Beetle Ranchers picked up these containers along with nets and stakes.

In early July, we monitored our study plots at the treatment sites and recorded data in data sheets produced by Cornell University . In mid-July, we released most new generations of the biocontrol beetles into our treatment sites. Depending on volunteers’ availability, and on the status of their beetles and plants, some beetle nurseries also were placed into the treatment sites earlier and some later.
We implemented a final round of study plot monitoring in September.

In the coming months, we will retrieve our plastic pots from the wetlands for re-use in 2012.

The goal of the Fowl Meadow Purple Loosestrife Biological Control Project is to establish a self-sustaining population of Purple loosestrife biological control beetles (Galerucella calmariensis and G. pusilla beetles) in the northern Fowl Meadow Area of Critical Environmental Concern in Hyde Park and Milton and at Brookwood Farm on the Milton / Canton town line, to reduce the prevalence of exotic, invasive Purple loosestrife (Lythrum salicaria) plants over the long-term. The beetles will migrate throughout the multi-town Fowl Meadow and its vicinity, helping to control Purple loosestrife.

The treatment sites are located on properties owned and managed by the Massachusetts Department of Conservation and Recreation – South Region (DCR), our project partner, and are within the Neponset River Watershed and also the Blue Hills Reservation, a popular state park. We began this five-year project in 2008. Field Season 2011 marks our fourth project year. One project year remains.

The biocontrol beetles and their larvae (and their predecessors and successive generations) feed on the Purple loosestrife plants, causing stress to the plants and inhibiting robust plant growth and flowering. As a result, Purple loosestrife seed production and dispersal declines. In this way, the negative environmental impact of these exotic, invasive plants is reduced both during the project and into the future. Were it not for the Galerucella, the Purple loosestrife would continue to outcompete native plants and gain dominance, reducing native plant diversity and the availability of high-quality habitat and food for native wildlife.

With an eye toward yielding long-term benefits, our project aims to produce a self-sustaining beetle population at our treatment sites by releasing biocontrol beetles over five consecutive summers (the general literature recommends at least three to four years of releases). Biocontrol beetles will reappear and reproduce at the release sites, each year, their numbers rising and falling according to the availability of Purple loosestrife, among other factors. If at some time there is insufficient Purple loosestrife at our treatment sites to sustain the beetles, the Galerucella will migrate away (up to several miles) to find Purple loosestrife on which to feed, or they will die.

The planned end result of our project – decreasing the presence of Purple loosestrife – will allow for an increase in quantity and diversity of native wetland flora, thereby restoring habitat for a variety of native wildlife and plant species, including state-listed endangered, threatened and special concern species in Fowl Meadow.

We are excited about the potential of this project to improve the ecological value of our wetlands and strengthen the constituency for stewardship and ecological restoration in the Greater Boston area. Each project year, more people gain a greater understanding of Massachusetts wetlands – the state that they are in, that they are important and biologically diverse landscapes, and how to help restore them – through this hands-on opportunity to improve and protect the local environment, and its accompanying publicity.

We invite you to view project pictures or to read more about the project.